1. I’m still processing the C-J’s four-part series titled “The Last Stop,” about the legacy and future of JCPS busing for diversity purposes. The district’s superintendent, Marty Pollio, told the paper, “What we are saying is, families in west Louisville still have the choice to leave their neighborhood, but for the first time in 36 years, they would also have the opportunity to attend a school in their community like every other child in Jefferson County.” A proposal that risks, Olivia Krauth and Mandy McLaren wrote, “eroding the plan’s original intent to integrate schools — this time beyond recognition.”

After finally getting through it all yesterday afternoon, this is the quote I can’t stop thinking about, from an expert on school desegregation: “We have asked our schools to solve our societal problems. That is really hard to do and to sustain.”

2. In the WFPL story “Awaiting Federal Aid, Louisville’s Indie Venues Start to Look Forward,” Stephanie Wolf wrote “indoor shows probably aren’t feasible until late fall. Early 2022 might be more realistic.” She talked to Micah McGowan, the owner of Play nightclub in Butchertown, and wrote of his worry that “the pandemic’s impact will be felt even after it’s safe to reopen.” He said, “People have gotten used to living this way. And it’s not like a light switch is going to happen and they’re just all going, ‘Oh, yeah, I’m going to go back to the way it was in 2019.’”

Feeling depressed, I then read a collection of beautiful and uplifting writing in this week’s LEO cover story, “A Year Without Events.”

Allie Fireel mentioned a ballet teacher — “this tiny, soft-spoken, 60-year-old man with effortlessly precise technique” — who “swore if you took a sharp extra half-breath just before the highest point of your jump, you’d hold off the end of your apogee — you’d float — for an extra tenth of a second.”

Sean Patrick Hill wrote about a boy at the Mid City Mall “who smiled at me brightly despite the fact my own mouth was hidden behind fabric. Seeing his face was like turning to the sun. I felt its light.”

And Laura Snyder, LEO’s publisher, wrote, “They say that, just as the 1918 pandemic ended, we’re going to usher in a second Roaring ’20s. Damn, what a party it’s going to be. Until then, we’re hunkering down, storing up our hedonism.”

In 2017, Anne Marshall wrote a profile of Reynolds for the magazine: “Lifting west Louisville, creating jobs, stealing a bit of downtown’s thunder — that’s another part of her plan. And in August 2016, when a tentative FoodPort project in the Russell neighborhood was scrapped, Reynolds prayed on it. What would benefit that community? What would lure folks to west Louisville at all hours of the day? One night, she opened her eyes from praying and there on the television was sprinter Usain Bolt, his spindly gazelle legs making victory look breezy. Aha.”

One of Reynolds’ mentors told Marshall, “Some people have the ability, but not the vision. Some people can have the vision but not the right stuff. (Reynolds) has both. (But) it is scary when you have a big vision and you see something that other people haven’t seen. You’re stepping out on a ledge. That doesn’t mean that it’s not the exactly right thing to do.”

Please read the story. Anne’s writing will never disappoint you: “Her mind travels like a wagon, collecting memories both pleasant and unpleasant, then drifting on for more. Reynolds wants to share. This is her story, after all. So let’s tell it. Let’s start with her name: Sadiqa. Arabic for one who is sincere, truthful.”

4. New copies of my first true love, Esquire magazine (especially in the mid-aughts, though I still subscribe), had piled up, so last weekend while catching up I read Ryan D’Agostino’s tender tribute to his friend Mark titled “When a Bottle of Costco Bourbon Is More Than Just a Bottle of Costco Bourbon.” Fatherhood, friendship, life, death — all in fewer than 500 words.

“She had been going through his stuff, and she handed me a bottle. …

“Mary smiled, shrugged. Yeah, she said. He said it was good. With a little ice. I dunno.”

5. The highwater mark for content this week this year has to be WDRB meteorologist Marc Weinberg (@MarcWeinbergWX) on Facebook (HE HAS MORE THAN 250,000 FOLLOWERS!) and Twitter, including plenty of dogs-rolling-in-fresh-snow vids with “GOOOOOOOD PUPPY!” captions.

“Wave 2 of our Winter Storm is picking up fast.”

“This may be one of the most perplexing forecasts I have ever seen in my career.”

“The dry slot is approaching Louisville and shows up in none of the data. Not the NAM, 3KM NAM, GFS, EURO, or HRRR.”

“Significant problems in the data.”

“I think I have muted 100 people in the last day. I can’t even imagine how boring your day has to be to troll a meteorologist.”

“I definitely have some serious shoveling to do at my house tomorrow.”

“That stuff is like cement with the sleet between the snow.”

“Raise your hand if you are waving the white flag on Winter?” 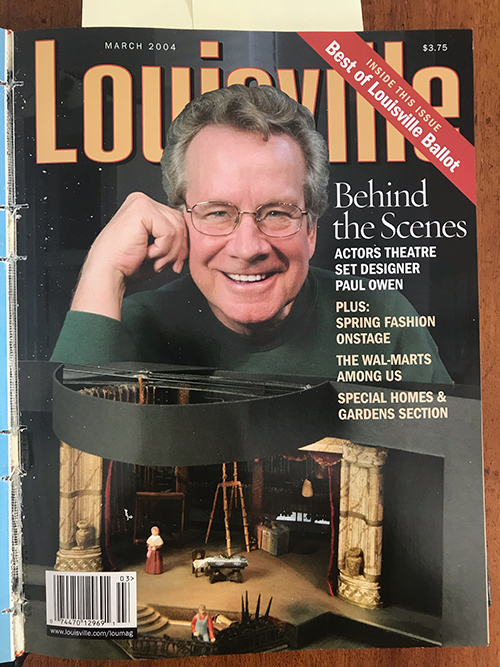 Last Saturday, I read the C-J’s obit for Paul Owen, an 85-year-old retired Actors Theatre scenic designer, and then this week, while doing some research in the magazine’s archive, I stumbled on this March 2004 cover of Owen.

Lewis L. Gentry wrote that Owen, a Texan by birth, had a “leading-man jaw” and “gray-brown hair that curls boyishly on the top of his head.” He studied at Wharton County Junior College in Texas, then attended the University of Houston, where he graduated in 1957 with a double theater major (AND three minor degrees in science and math). He joined Actors in 1971, when he was 36. “Designing, you get to do all of it, you know? You have to block the plays, you have to play the characters in your mind. You have all this possibility from a directorial point of view,” he said.

The head of directing at the Carnegie-Mellon School of Drama said, “Paul’s designs are speaking to your heart, not just to your eyes. Many designers, their work is reliable and informative, but crawling, not flying.”

“When we’re succeeding,” Owen said, “is when we’re least noticed.”

Gentry wrote, “Nothing lasts forever in the world of theater. Owen’s designs are all transient, ephemeral, part of the real world for the blink of an eye and then gone, only a memory.”

Owen worked out of a second-floor production studio on Breckinridge Street, between Seventh and Eighth streets. He wore dark-blue sneakers with Velcro straps and fastened a key-filled chain to his waist. He’d been with his wife, Mary Louise Vincent, for almost four decades when she died of breast cancer in 1994. He covered a bulletin board with baby pictures, colleagues’ offspring — his “grandchildren.” He made homemade jams. His two-door Saturn sedan was “as uncluttered as a rental car.” On his dresser at home, he kept “a row of paperbacks divided into the books he’s read and those he’s going to read.”

Gentry asked him if he planned to work “right up until the end.” Owen replied, “What else is there?” and mentioned cremation. “A double burn where there is nothing left but air. Then the air escapes. I can’t imagine more freedom than that. Going to sheer energy, infinity, no beginning and no end. No anchors.”

I was reading this WFPL story about Louisville’s “mid-year budget” being “stronger than expected” and learned that the city’s chief financial officer is named Daniel Frockt. Aaaaand now my wife is waiting for the day I stop thinking “What the Frockt?” is funny. Significant problems in the data. Her laughter isn’t showing up in the NAM, 3KM NAM, GFS, EURO or HRRR.