“I knew that one day this would explode” — from a national Ringer story about Louisvillian Mike McCaskill, who referees indoor sand volleyball at King Louie’s in Middletown…and who made, oh, $25 million betting on GameStop

1. Last month Taylor Killough wrote a profile of activist/new mayoral candidate Shameka Parrish-Wright, and although Killough started the reporting over the summer during the protesting pinnacle, early this year she documented the scene downtown at Jefferson Square Park, now known as Injustice Square — the heart of the racial-justice movement in the wake of the police killing of Breonna Taylor. She wrote, “In mid-January, only a few men occupied Injustice Square. A gray tarp covered what was left of Taylor’s memorial. The white tent was fortified to keep out the cold, with colored tarps hanging down its sides. A pile of wood scraps leaned against one of the concrete planters, which were mostly empty except for a few hardy plants.”

All winter I’ve wondered what warmer weather will bring, and I saw how, on Tuesday, folks gathered at the square before caravanning to Frankfort in support of a bill — “Breonna’s Law” — banning no-knock search warrants statewide. I keep thinking of this quote from a protester in a C-J piece late last month: “They thought we were gonna give up. They thought we were done because the weather got cold. Now they’re starting to see, we’re back.”

2. The New York Times has a story about eastern Kentucky coal country, and President Biden’s executive order on climate change that “also promised a new focus on economic development in communities that have been reliant on coal mining and power plants.” A committee has 60 days to formulate a plan…to address a generational problem. From the piece: “Communities once reliant on coal mining are understandably skeptical. Administration after administration has tried to bring the region sustained prosperity, yet many communities remain on the brink.”

In 2015, we ran a package of stories titled “Beyond Coal,” with a haunting cover illustration by Douglas Miller: 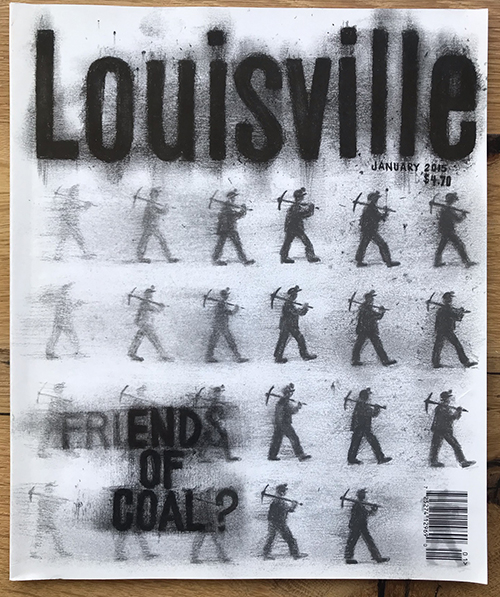 In one piece, Anne Marshall wrote about former coal miners who didn’t want to leave eastern Kentucky and were embracing new careers — electrical lineworker, trucker, welder, pest-control technician — close to home. The U.S. Department of Labor had awarded $11.3 million to re-train out-of-work coal-industry employees and their spouses, through an effort dubbed H.O.M.E.: Hiring Our Miners Everyday. At a job fair for a Louisville-based railroad company, 300 people showed up. Twenty-five were hired.

H.O.M.E. helped to cover the costs of barber school for a man named Chris Crider, a fifth-generation miner.

A father and son walk into his barber shop. “I seen your sign out there for a while. I didn’t know it was you,” says the father. He and Crider went to high school together. The young boy, probably 11 or so years old, wants his haircut “high and tight.” Crider’s clippers buzz. He and his old friend start talking about the loss of coal jobs. Without a whole lot of other industry, they worry the area’s population will thin. “He won’t stay here,” Crider says, pointing to the boy. The boy pouts for a quick second. His father nods.

Crider continues, saying, “When he gets old and retires, he’ll come back.”

“That’s it,” the boy’s father says, agreeing. “You’ll see that more and more.”

3. Ms. magazine had a piece this week that mentioned LMPD’s investigation of one of its own officers, accused of participating in an anti-abortion protest at the E.M.W. clinic downtown while in uniform and driving an LMPD vehicle. And last month the C-J’s Emma Austin did a story about Metro Councilman Jecorey Arthur’s effort to “bring back a proposal for legislation allowing the downtown clinic to create a ‘buffer zone’ extending from the facility’s front entrance to the sidewalk, where protesters wouldn’t be allowed.” Austin’s C-J colleague Darcy Costello, in a separate piece, quoted the director of the National Clinic Access Project: “When you allow a city block in the heart of Louisville to become the Wild West…several times a week for hours on end, you are creating an atmosphere that is conducive to violence.”

For this Louisville Magazine story I wrote in 2014, the clinic’s director told me how, in 2008, she’d written to then-Mayor Jerry Abramson, requesting a buffer zone. In his response, Abramson said that he had forwarded a copy of her letter to the police chief. “As you noted in your correspondence, individuals participating in this type of protest have a constitutional right…,” Abramson wrote.

I spent four months interviewing and observing protesters (“prayer warriors”), and the “escorts” who help patients navigate what tended to be a chaotic scene while making their way to the clinic’s front entrance. I mostly reported from the sidewalk but also toured the clinic, including the OR in the basement, which had faux-wood floors and walls painted in pastel blues, greens and peach, with waist-high wallpaper borders in a seashell theme. One weekend I attended a pro-choice rally in Frankfort on a Saturday, then the following night took my notebook to the sidewalk in front of E.M.W. A group had gathered outside to wrap up 40 Days for Life, a national campaign that has folks pray outside abortion clinics for 40 consecutive days, with a goal in Louisville of at least two people there from 7 a.m. until 7 p.m. (The recent alleged incident with the LMPD officer was during 40 Days for Life.)

The group gathered for a photo. One woman wondered how many of them were in attendance.

The woman looked at the man, then at another woman, who was pregnant.

“Did you count the one in her belly?” she said.

I know Forecastle just announced its 2021 cancelation (😭), but I’m calling it now: surging-like-GameStop Harlow will be a headliner when Forecastle finally returns in 2022, this time at Waterfront Park over Memorial Day weekend instead of in sweltering July. Like Louisvillian/newly minted multi-millionaire Mike McCaskill (whom I mentioned in the opening quote), I’d bet a GME-worthy — what’s the word, Mike? — “assload” on that. 🚀🚀🚀

5. And now some Burgoo, aka a serving of the roadkill stew that is the inbox.

“I AM SEEKING YOUR 15 MIN.” // The Ali Center’s president and CEO has accepted a job in his hometown of Chicago. // The Omni has a new GM. // “Timely: Virtual Bra Fittings.” // Up at Moremen Gallery: the works of Jacob Heustis, who “uses painting, drawing and installation to question and explore value and class systems.” // “…the need for immediate action to improve the eviction process in Jefferson County. This is an emergency for our community.” // The nonprofit One West is creating the Plan Room, a “business accelerator…for Black and brown contractors and construction business owners.” // “BBB has received multiple reports of puppy scams, with one local losing $850 on a (non-existent) Doberman Pinscher.” // “Dog Waste Gets a Green Makeover.” My (non-existent) Doberman Pinscher isn’t interested. // Salad restaurant Green District is opening at the corner of Bardstown Road and Eastern Parkway. (Bye, Comfy Cow.) // “FREE” — but here’s the catch — “VIRTUAL wine tasting.” // “Spring things🌷🌷🌷”// Squallis Puppeteers will perform the virtual debut of The Other America: An Anne Braden Story beginning 6:30 p.m. Friday, March 19, on Zoom. // Camelot at Derby Dinner Playhouse. // “Babies.” // Change Today, Change Tomorrow held its inaugural Black Recharge fundraiser. // “Fur babies.” // James Graham Brown Foundation announced nine grant recipients, including the Council on Post-Secondary Education, Junior Achievement of Kentuckiana and Evolve502. // “Fruit Bat Moving Day!” // Ronald McDonald House Charities of Kentuckiana, with bourbon aficionado Fred Minnick, are fundraising by raffling off five bottles of Pappy. // Co-working “concept” Lodgic Everyday Community is set to open in NuLu this month. Mike Wajda, formerly of Proof, will be executive chef. // “Boy, do I have some exciting live Zooms for you.” // New GLI board members. // Introducing the Black Jockeys Lounge, formerly Encore on 4th. // Try to get through reading this: “the leading insurance platform for registered investment advisors (RIAs).” // 7 p.m. tomorrow, the VOICES of Kentuckiana chorus will perform a virtual cabaret called Hindsight 2020. // I’m sorry I forgot to mention Restaurant Week last month. // “Are you getting my emails?” // Kentuckiana = not a word. // “Compliance…webinar…Form 1099-NEC” — zzzzzzzzzzzzzzzzzzzzz.

Do the recent bursts of sunshine have anybody else ready to, um, “POP! into Spring” with the — SORRY! — “sexy, voluptuous and womanly glam of Hollywood in the ’40s, ’50s and ’60s…slightly adapted and subtly updated, of course, for the red-hot ’90s”?

Miles, my four-year-old: “Can I hug my teacher now? She doesn’t have the Corona. Her germs are gone.”