“Should I wear my Golden Snitch mask or my Trolls World Tour mask or my O.M.G. Dolls mask?” — Emilia, my “a little nervous but mostly excited” first-grader, getting ready for her first day of in-person school in more than a year

1. Had a technical glitch in last week’s newsletter (sorry!), so I’d love to ask ya again: Will you click here and nominate two people for me to interview? Then I’ll have each of them nominate two people, and then the people they nominate will each nominate two, etc. — until I’ve interviewed ALL OF LOUISVILLE.

2. Some of the most impactful local reporting I’ve read this year is by the C-J’s Bailey Loosemore, who has been covering what housing advocates fear is a looming crush of evictions. About a month ago, she had a piece about landlords using loopholes to “force renters from their homes” during the pandemic, then, for a story published this week, she followed an “eviction prevention specialist” at the Louisville Metro Housing Authority.

“Through the pandemic, state and federal moratoriums have prohibited or reduced evictions, drastically lowering the total cases filed in Louisville last year,” she wrote. But: “A current moratorium against evictions for non-payment of rent from the Centers for Disease Control and Prevention ends March 31, and Kentucky does not have its own moratorium in place, meaning eviction filings could again spike.”

One expert told her: “Even if you extend the moratorium, and we put so much energy into extending the moratoriums, you’re just placating the problem for another month or two. … At some point, lawmakers are going to have to make a choice. Are we OK with massive levels of families experiencing houselessness as a result of this, or are we going to cancel rent?”

My former colleague Anne Marshall, collaborating with the Kentucky Center for Investigative Reporting, spent months in 2018 reporting about Louisville’s eviction crisis, when the city’s eviction rate was already almost double the national average. She followed up during the pandemic, writing, “Many believe the surge in evictions could end up causing more damage to communities than the 2008 foreclosure crisis.” A representative from the Louisville Apartment Association told her, “Everything I’ve put out I’ve said, ‘Talk to your landlord, explain your situation.’ Everybody is willing to help in this pandemic. But rent was due; it’s not forgiven.”

3. We dedicated last year’s Best of Louisville to the 2020 class of local high school seniors, and our summer issue included interviews with almost 400 of them. I checked back in for last week’s newsletter, and here’s more of what they had to say:

What’s the most difficult day or moment you’ve had during the pandemic?
“The only difficult days I’ve had with the pandemic were the busy days at Kroger when just about every man, woman and their baby were asking for toilet paper. I doubt they’d find it in the dairy department.” — Justin Riggs, Silver Creek (Sellersburg) grad, Ball State student

What’s the best day or moment you’ve had during the pandemic?
“I successfully completed a play at Murray State during the pandemic, wearing two masks onstage and socially distancing between actors. It was a complicated process at first but an amazing experience once it all came together. It made me realize that, even though this pandemic makes things harder, nothing is impossible.” — Olivia Beach, Ballard grad, Murray State student

“I haven’t really had a specific day, but pretty much any day that I’m able to actually do something or be somewhere that I wasn’t able to be or do before feels really good.” — Sierra Waggoner, Jeffersonville grad, Purdue student

“Being able to meet my WKU dance teammates in person for the first time in July. We had been practicing on Zoom, but there was no better feeling than being together on campus.” — Tori Minteer, Ballard grad, Western Kentucky student

How has the past year changed you?
“I have sincerely learned to appreciate every small thing that happens. I recall on Tuesday getting overexcited because, for the first time in a long time, I was given a written test. It wasn’t online. It was written! Which means paper was printed out and I had to physically fill in the answers.” — Camden Hardesty, Floyd Central (Floyds Knobs) grad, Indiana State student

What part of your new routine from the past year will you continue?
“I message people when I think about them.” — Maura Maguire, Presentation Academy grad, JCTC student, working at the Louisville Zoo

“I got really good at making coffee at home. I will keep working on my barista skills instead of buying coffee all the time.” — Minteer 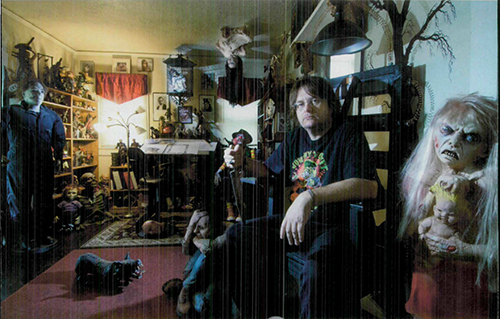 Jeff Gaither, seen here in a 2011 Louisville Magazine portrait, has created art for Forecastle and posters and album covers for punk/hard rock/metal bands (Guns N’ Roses, Van Halen and the Misfits, to name three). He completed the interview I mentioned in No. 1 (and nominated two other artists!).

Here are just some of the answers he sent me a couple of weeks ago:

What posters hung on the wall of your childhood bedroom? “I can’t remember back that far because I am 60 now. Just joking. Alice Cooper, Pink Floyd, monster posters and pictures of Cooper and other odd stuff I would cut out of magazines.”

Earliest childhood memory? “My step-father and mother had just purchased me a very small turtle. We all sat at the dinner table in silence, watching the turtle crawl.”

Best show/concert you’ve been to in Louisville? “Ronnie James Dio. Back somewhere in time (too much drugs at the time), but I do recall the concert itself. I had binoculars and could see Dio was actually enjoying himself and the crowd. Plus, at one time during the concert, Dio pointed at a large pentagram on the stage. Each time he pointed at a point around the pentagram, a large flame would explode into the air.”

What’s something unexpected you love in Louisville? “The Louisville Nature Center off Illinois Avenue across from the zoo. They have a bird blind that allows you to view birds at feeders through one-way-tinted glass. You can also hear the bird sounds piped in through speakers. It’s a great place to be.”

How have you changed in the past year? “I am one year older and one day closer to death. I do, however, try to appreciate every day more.”

Which possession of yours do you consider priceless? “None. I will sell anything for the right price.”

For a short profile in 2011, Amy Talbott described the work of Gaither, who was raised on horror movies and comic books, as “cartoonishly macabre.” He told her, “My aunt took me when I was 12 to see The Exorcist. You don’t take a kid to see The Exorcist, but it was so great that we stayed and watched it twice.”

Talbott visited Gaither at his home, which had a life-size replica of an electric chair and a statue of Michael Myers from the Halloween movies. Autographed cast photos from Saw and Night of the Living Dead decorated the walls. “Because of the type of artwork I do,” Gaither told her, “I’ve run into a lot of, um, interesting people.” He mentioned a fan letter he received from serial killer John Wayne Gacy and a postcard from Charles Manson. “I have no idea what (Manson was) talking about,” Gaither said, “because I can’t read his crappy writing.”

5. Last month I was exchanging emails with Joe Manning, the deputy director of the Louisville Story Program, about collaborating with the magazine, and at one point he mentioned my newsletter and said, “Thanks for watching Call Me Kat!” — that FOX sitcom set but not filmed here, about a late-30s owner of a cat cafe in the Highlands. “That is not an easy assignment, but sometimes we have to take one for the edification of the community at large.”

Dear reader. Dear, dear reader. As Call Me Kat’s sole viewer, I apologize for leaving you hanging these past several weeks. I know you need to know how the show is portraying us, so last night I caught up. “Remember like 10 years ago at halftime when the U of L mascot took off at the half-court line and jumped on the trampoline, misjudged the hoop, hit his head on the backboard? … And then he had to be carried out on a stretcher and everybody chanted: Louie! Louie!” Me neither. And I’m afraid I have never tried a gray-colored Louisville Tombstone (“’cause after two of these you’ll be six feet under!”).

I do need to get my hands on one of those Valu Market totes, though.

Support for Louisville Magazine comes from Kentucky Select Properties, which this week announced the Eleanor Foreman Scholarship, in honor of the woman who integrated the Louisville Board of Realtors by becoming its first Black sales associate in 1963. (She was 94 when she died July 30, 2020.) The scholarship will cover the annual cost for one recipient to: attend real estate school, acquire state licensing, receive a two-year membership to the Greater Louisville Association of Realtors and the National Association of Real Estate Brokers, gain errors and omission insurance, and complete 48 hours of continuing education required of new agents. The recipient will also spend their first two post-license years as a Kentucky Select sales associate. Those interested can apply here.

Support for Louisville Magazine also comes from Phocus, the caffeinated sparkling water available all over town, including at Heine Bros.’ Coffee, Kroger, Paul’s Fruit Market, Rainbow Blossom, Thorntons, Party Mart, Liquor Barn…and, as anybody who has been to the magazine’s office can attest, the small refrigerator in the kitchen, where cans of Phocus are known to disappear. 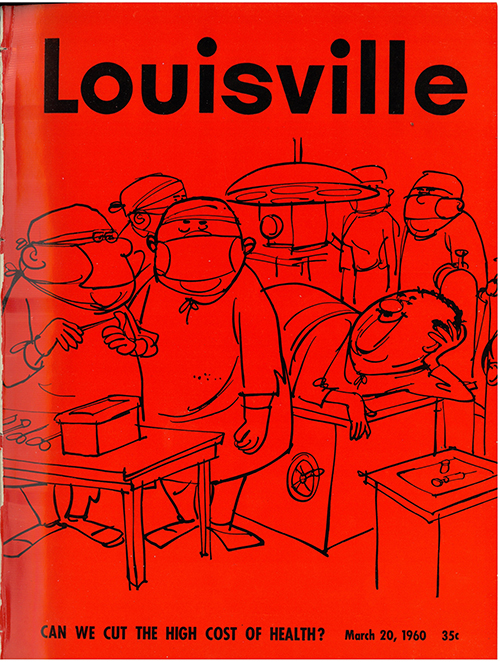 In last week’s newsletter, several medical professionals shared their thoughts on the past year. Here’s what they said about this cover from March 1960, with the blurb: “Can we cut the high cost of health?”

“And it has only gotten worse. Sixty years later and the cost of healthcare just continues to skyrocket. No progress. It’s sad.” — Dr. Meredith Sweeney

“In today’s world you’d never see an operating room with all men. At the least, our society has progressed on that front. If costs were high then, they are astronomical now, leaving society with much to consider regarding how to allocate high-quality, cost-efficient care without destroying our system completely.” — Dr. Scott Kuiper, orthopedic surgeon

1. With no U of L in the men’s tourney, can we all agree to root for my alma mater, the Ohio University Bobcats? We play UVA tomorrow night.

2. I’m not gonna comment on the frequency of showers in the Moss household throughout the pandemic, but last night, to celebrate completing her first day back at in-person school, Emilia asked if she could climb the tree in the backyard, then said, “Is tonight bath night?”

“Because I don’t like climbing the tree if it’s not bath night.”

“Did you know that any night can be bath night?”

“So I can climb the tree whenever I want?”