1. I mentioned this briefly last week: Our next print issue, out later this month, will feature a deep dive into the archive of Louisville Magazine covers. Seventy-one covers — one from each year since our founding in 1950 — with commentary from 71 Louisvillians. This week, I’m turning “Five. Oh! Too…” over to that project. 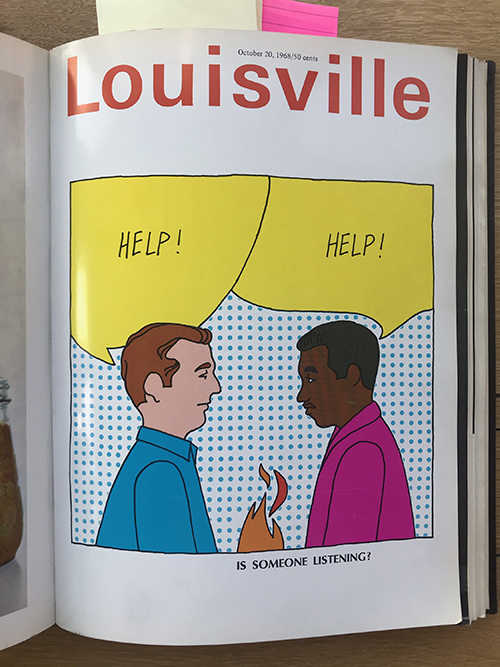 “And the fire still burns because no one was listening. Can you hear me now?” — Reynolds, president and CEO, Louisville Urban League 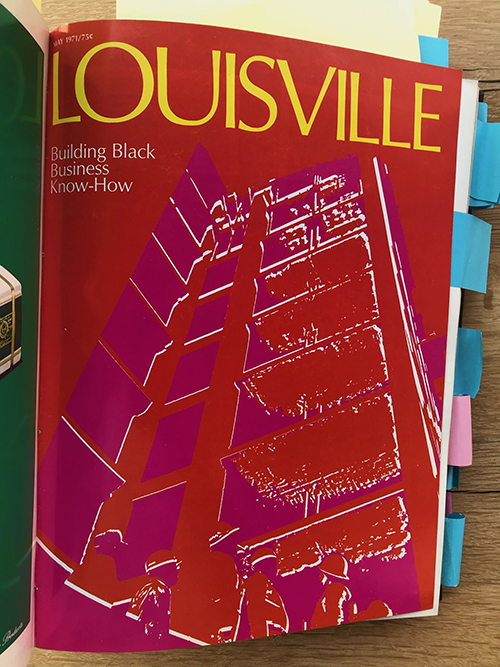 “While the intent was likely executed in good spirit, there is evidence that a Black voice was likely not at the table for the decision to review the cover photo before publication.

“Black businesses were present in Louisville during the 1970s, and not having a face to go with the title was an egregious miss. Black businesses deserve that visibility, then and now. The other major miss was not bringing in Black business leaders who could provide that ‘know-how’ to other businesses. There were discriminatory practices, policies and underlying issues that hindered Black businesses. Yet many grew, and their priceless knowledge deserves a platform, so it can be passed along to the next generation of Black business owners.

“Recognizing that these challenges still exist, today I am glad to see so many forms of incubators and programs designed solely to help build, grow and sustain Black businesses. This was a need in 1971 and still is today.” — Ashley Duncan, VP and director of inclusion and diversity, Republic Bank & Trust Co. 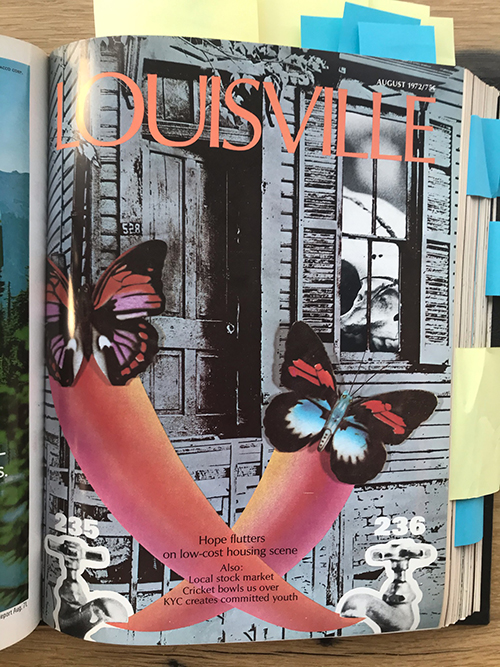 “Hope now wanes on the low-cost housing scene. We are desperately trying to help neighbors avoid evictions not only because it is financially and mentally devastating, but also because there is nowhere for them to move. Extended-stay hotels are full of families who are paying $1,200 a month because they have lost too much money on applications for new housing. They do not make three times the rent and have a bad credit or rental history, so they are denied again and again. There is nowhere for them to go, and spending every last dollar on a hotel for three years until their name makes it to the top of the Section 8 waiting list is not a solution. We need to pass new zoning policies that allow for multi-unit development. We need to fund community-led development to keep investment local. We need to ensure rent assistance to prevent evictions after COVID relief dollars disappear. We need more housing voucher programs. Then, maybe, hope can reign again.” — Clare Wallace, executive director, South Louisville Community Ministries 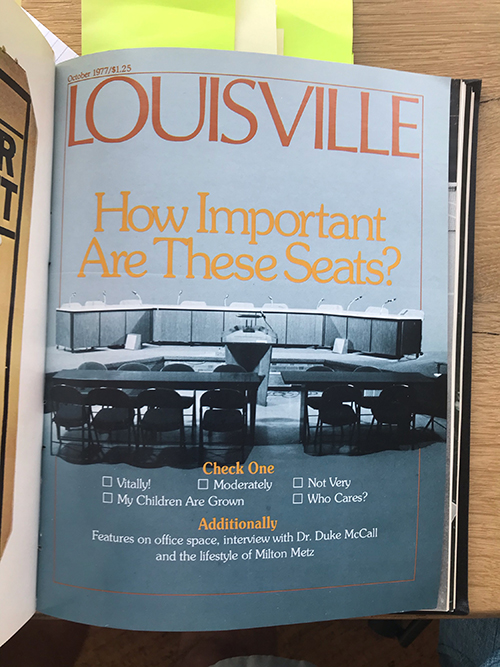 “The dated nature of the cover photo seems to amplify its title question, as if to cast doubt on the value and relevance of school board seats not only at the time but also — and perhaps to an even greater extent — today.

“And yet, nearly 44 years following the publication of this Louisville Magazine issue and after more than a year of a global pandemic that is still with us, having elected members of the community to steward the major governance decisions of their own school systems appears even more essential. Such decisions continue to matter greatly to its constituents. Consider the closely followed recent decision of the JCPS board to have students resume in-person learning this year as part of a hybrid model. The emotional 4-3 decision required hours of deliberation, with strong arguments on both sides debating an action that would affect more than 100,000 students — not to mention countless guardians, teachers, staff and administrators.

“In my view, however, even more important than the decision itself is the institution that requires those deliberations to be open to the public and to be led by elected members who answer to it. Regardless of where you fall on any one school-governance issue or another, the true value of a school board rests in its democratic structure and the transparency of its discussions, which act to earn and preserve the trust of the community it represents, as well as to safeguard and voice the needs of our most vulnerable families.

“Side note: The survey-like checkbox options in the lower third of the cover weakened the impact and the proposed question. They seemed to trivialize the value of a school board and thereby almost bias the viewer’s response, implying that the question could be reduced to one answerable by a fixed number of easily predetermined responses. Furthermore, by asking the respondent to select a single response, mutual exclusivity among the options has been assumed when that is clearly not the case. A selection of ‘My Children Are Grown,’ for instance, seems to convey the irrelevance of the question to some respondents, but parents of adult children — who are also, after all, taxpayers supporting the public school district — could very well still have strong opinions about the role of their local school board, especially in retrospect if their children had matriculated through and graduated from that school system.” — Moshe Ohayon, founder, Educational Justice 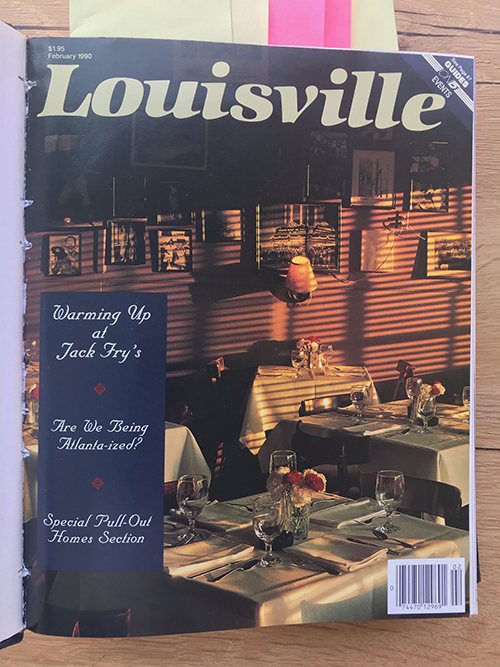 “My first thought is that it looks as though it’s full of memories — but eerily quiet, peaceful and serene, unknowing of the wild ride that lies ahead.

“I remember many days during the closure of 2020, sitting alone staring with disbelief into the sad and empty dining room, seeing those same streaks of life-giving, hopeful sunshine piercing between the blinds, striping the walls and illuminating the photographs. I could feel the confused, abandoned space craving excitement, energy and life, just as we are all are right now.”— Stephanie Meeks, owner, Jack Fry’s 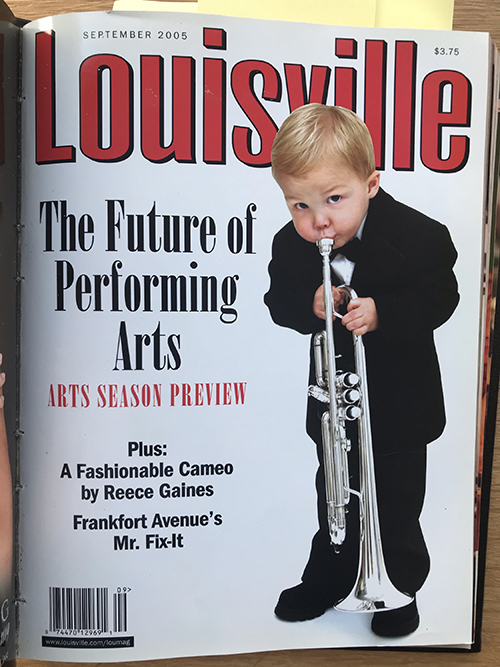 “I don’t remember the day of this photo shoot because I was three years old at the time. I was holding my dad’s trumpet. He played it all through high school and college and up until last year, when he bought a new one.

“I grew up in a very musical family, my mom being a band director and my dad playing trumpet. I always knew that, once fifth grade began, I was going to be in band. I went to Crosby Middle School, and my director was Joseph Stivers, who pushed me to practice my trumpet a lot. I started making all-district band and getting distinguished ratings at solo festivals. He truly was an amazing teacher and friend. Once I got to high school, my parents put me in private lessons with Ryan McCaslin. Throughout my time at Eastern High School, I was part of All-State three out of the four years, including first chair this year, Governor’s School of the Arts, Louisville Youth Orchestra, All-District Band and more. Looking ahead to college, I am going to major in music education. I aspire to be in a position to impact students the way my teachers impacted me.

“We have many copies of that magazine in our house. It’s a great conversation starter.” — Easton Barham, Eastern High School senior 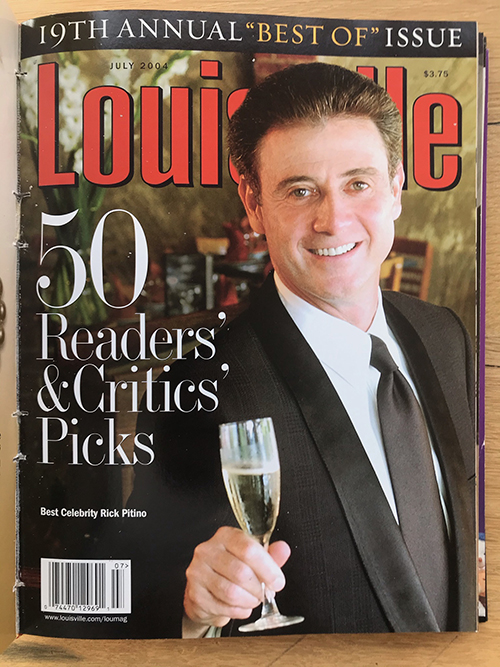 Cover caption from the table of contents (not making this up): “Best Local Celebrity Rick Pitino at Porcini, the Best People-Watching Restaurant.”

“Well…that is — that is certainly a caption. Best People Watching, eh? I want to make one of three dozen low-hanging jokes, but the evidence that this is all a simulation and whoever’s running the show is getting bored with us has never been stronger. I’m honestly terrified right now. ‘Best People Watching.’ There’s no way this is real. No way. It’s too perfect.” — Mike Rutherford, Card Chronicle