“None of the others understand me when I say Lou-ah-vuhl” — Emilia, my first-grader, after trying to explain where she’s from to some out-of-state kids (and I’ve never been prouder!)

1. During a Louisville Forum discussion Wednesday, titled “The Future of Policing in Louisville,” USA Today national political correspondent (and west Louisville resident) Phillip M. Bailey moderated a discussion with LMPD chief Erika Shields, who was sworn in Jan. 19. “It has to be rebuilt,” she has said of LMPD. “It has been broken for years, and it hit a tipping point with Breonna Taylor.”

Bailey brought up the surge of homicides in the city, and Shields mentioned the difficulty in curbing gun violence, saying, “It’s straightforward. When you’re in the environment we’re in — as broken as it is — people aren’t cooperating. People don’t talk to police.” (Full video, plus stories from WHAS, the C-J and WDRB.)

2. Holland Cotter, co-chief art critic at the New York Times, wrote a review of the new Speed Art Museum exhibition “Promise, Witness, Remembrance” (up through June 6), describing the 30 or so pieces as “quietly passionate” and “conceived as a direct response to a contemporary news event: the killing, by Louisville police, of Breonna Taylor.” That surprising urgency, he writes, is coming from one of America’s “conventional encyclopedic museums,” which tend to operate like “glacial machines.” The focal point is Amy Sherald’s posthumous painting of Taylor, originally commissioned for the cover of Vanity Fair’s September 2020 issue. Cotter writes, “‘Promise, Witness, Remembrance’ is the only large-scale institutional show to date that addresses the important episode in our contemporary national history that Taylor’s violent death, and the communal reaction to it, represent.”

For a powerful WFPL piece, photographer Jon Cherry — whose work covering the city’s racial-justice protests is featured in the exhibit — walked through the Speed as several Louisville protesters saw the show for the first time. One woman told Cherry: “What dug deep into my soul was when I read (Taylor’s) mom’s narrative on her child. The timeline. When I read the part where it was in Breonna’s own words, that she thought she was on her way to being something good, something great…. And her life was snuffed out so violently. It touched me. So I had to stop. As a matter of fact, to be honest, I stopped reading the timeline and I took a break. Took a little walk and I came back and I finished. Because it gets to you. It’s very emotional.”

WFPL is part of Louisville Public Media, which has two new newsletters you should subscribe to: the every-other-Thursday Arts, Culture, Et Cetera, written by one of my faves, Stephanie Wolf, WFPL’s arts and culture reporter; and the twice-a-month LPM Podcast Newsletter, written by another fave, Laura Ellis, LPM’s director of podcasts and special projects.

Keith and I enjoy discussing the everchanging journalism landscape, both nationally and locally. (The word that comes to mind when I try to describe his writing, even in emails, is eloquence.) In 2018, he did a piece for me about his 40-plus years at the C-J, writing: “The Bingham family owned the Courier-Journal and the Louisville Times, and Barry Bingham Sr. resolved to create a living and breathing workspace for his newspapers and radio station (and, eventually, for WHAS-TV). Desks were modern, with side carrels for typewriters. The predominant colors were orange, tan and gray. In those days, the fourth floor was divided in half. The C-J editors and reporters were on the west side, the Louisville Times staff on the east. In the middle of the room stood the copy desk, staffed around the clock for morning and evening news cycles. The air smelled of ink, paper and smoke from cigarettes and pipes. By about 5 in the afternoon, the newsroom’s roar was deafening. The combination of manual typewriters and ringing telephones required concentration skills that I cannot even imagine anymore.”

4. Tomorrow is two weeks out from the First Saturday in May. Last year, after the Kentucky Derby announced its pandemic-prompted postponement, we published this cover in late April, thinking it captured the uncertainty of the moment we were (and, in so many ways, still are) living in. 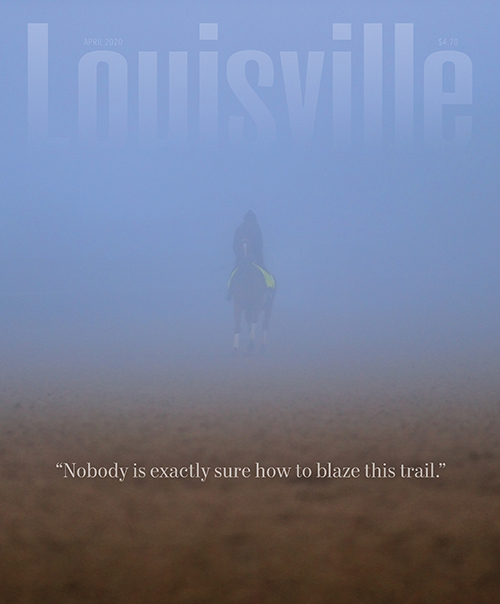 Even before any of us had ever heard of COVID-19, though, the cover spoke to the confusion surrounding the 2019 Derby’s controversial finish (that’s winner-by-disqualification Country House in the image), as well as the larger questions about horse racing’s future amid reports of rampant horse deaths and industry drug use.

Defector recently published a story titled “Is Horse Racing Still Too Big to Fail?,” examining the economics at tracks throughout the country. “There are fewer races and fewer horses being bred, fewer owners and fewer fans in the stands. Dozens of racetracks now depend almost exclusively on state dollars for their existence.” One expert said, “…the heart of the sport of horse racing is barely beating.”

5. And now, dear reader, you can exhale your bated breath: A few weeks late, but I somehow mustered the courage and made it through the season finale of cringey, has-it-been-canceled-yet? Call Me Kat, which, FOR THE LAST TIME (has to be canceled, right?), is a laugh-tracked FOX sitcom about the owner of a Highlands cat cafe (set but not filmed in Louisville).

A few weeks ago I was certain I was Call Me Kat’s sole viewer, but then I heard from reader Kristen Miller: “Just wanted to assure you that there are at least THREE Call Me Kat viewers out there. I watch every episode and force my husband to do the same. It is…painful. A weekly chore. But I truly believe as a Louisvillian it is my job to bear personal witness to each and every local reference made” — YES, EXACTLY! — “and rate it on a scale from: Yes, we did used to have a giant floating fountain in the river (ridiculous)” — even if true! — “to Al Capone swilled bourbon and played cards at the Seelbach (believable). Right now, I’d say we’re hovering somewhere around: We’re insane college basketball fanatics.”

Speaking of hoops: I got all excited when I spied a vintage-looking University of Louisville crewneck sweatshirt in the finale, then saw it’s for sale at the campus store for $62.

That eternal question, Cards or Cats? Answer: NOT Kat.

Support for Louisville Magazine comes from…..zzzzzzzzz. Sorry, dozed off there for a sec. It’s been a loooooooooong day/week/month/year, and I needed a Phocus as a pick-me-up. You can find cans of Phocus, the Louisville-founded caffeinated sparkling water, nationwide, including in town at Heine Bros.’ Coffee, Kroger, Paul’s Fruit Market, Rainbow Blossom, Thorntons, Party Mart, Liquor Barn…and, as anybody who has been to the magazine’s office can attest, the small refrigerator in the kitchen, where cans disappear.

Support for Louisville Magazine also comes from the Louisville Ballet, whose new original ballet art film (made by our friends at KERTIS Creative!) is a presentation of Stravinsky’s Rite of Spring, streaming April 22 through May 31.

A little something MORE from the LouMag archive.

Last week, the C-J published a piece about its nearly 75-year-old downtown building hitting the market (listing price: $17 million), with the majority of the quotes coming from a commercial real estate broker involved with the sale. He said, “By rightsizing and getting into a new space, it saves a lot of money. We want to get you into a nice, new, modern, techy space that feels like what you’re doing.”

It reminded me of this 1994 Louisville Magazine cover: 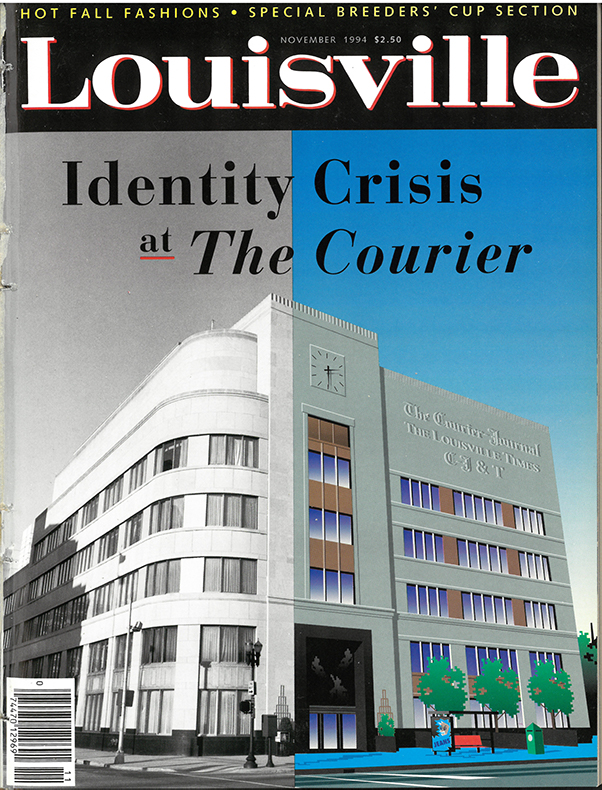 I asked Betty Bayé, a former Courier-Journal editorial writer and columnist, to share some thoughts about the image.

“I spent 27 years at the Courier-Journal, and these days when I drive by Sixth and Broadway, it pains me to see mostly empty employee parking lots. I ride across Sixth Street, glance to the left, and see the empty loading dock where the newspaper’s green-and-white trucks once lined up to receive their allotted bundles for delivery to all 120 Kentucky counties.

“While I’m not sure which ‘identity crisis’ this Louisville Magazine cover was referencing, I do know is that, in 1994, the C-J crew was hard at work. I recall being excited to join the staff of one of the nation’s 10 best newspapers with bureaus in Washington, D.C., Southern Indiana, Frankfort and across Kentucky. I am reminded of the Pulitzer Prizes won, and how, when I arrived from New York in ‘84, the C-J and its now-defunct afternoon sister, the Louisville Times, combined to boast one of the most racially diverse local news staffs in the nation. We occupied a single newsroom split down the middle, but the C-J&T were fierce competitors. Ten years removed and I’m still proud to have served on an editorial board that took progressive, and sometimes even radical, stances on civil rights and social justice issues in this conservative state.

“The C-J, it’s fair to say, has an identity crisis several years running, transitioning from a largely print publication to a digital one. Top leadership is a revolving door. The news staff is lean, and more than 100 local jobs disappeared recently when Gannett shut down the C-J’s $85-million printing press and production operation and transferred those functions out of state.

“So now, in 2021, that magnificent Art Deco building at Sixth and Broadway is literally a ghost ship, largely empty, dark and filled with memories. But to echo two lines from one of my favorite songs: ‘Everything must change. Nothing and no one stays the same.’”

A few years ago, Bayé wrote a wonderful essay for me titled “Sweet Chestnut Street,” for an issue about west Louisville. It’s about journalism and neighborhood pride and homeownership and race and family and blight and so much more. She recalled a trip her mother and aunt took to Louisville decades ago: “I showed Mom and Aunt Ebby around the newsroom, where the air was stinky and thick because so many editors and reporters, including me, smoked at our desks. The C-J and Louisville Times were at full strength then, so practically every desk chair had someone’s behind in it.”

Bayé — still proud of her journalism career, still proud of the home she once owned on Chestnut Street in the Russell neighborhood — wrote: “I grew up in a public-housing project (in New York) that was paradise compared with the slums my family had moved out of. I watched my mom and dad work hard but never earn enough to buy a house or even a car. They wanted the best for me, and I want the best for other African-Americans in Russell and other neighborhoods being eyed for revitalization. I want other African-Americans to experience the joy and the sense of accomplishment that I did nearly 40 years ago, when I put a key into a lock, opened the door of my first house, stepped inside and said, ‘This is mine.’

“Every now and then, I ride past my old house and recall the good times. Maybe one day I’ll get out of the car, knock on the door and ask the owner if I can look inside. I wonder if the flowers that Aunt Ebby planted are still blooming.”

The digital transcription service I use heard Lou-ah-vuhl several times in one conversation and wrote: Lowell, Google, avoidable, global.