“And the horse claimed it was just holding it for a friend.” — Stephen Colbert on the Late Show, after Donald Trump insulted that “junkie” of a Derby winner Medina Spirit, who tested positive for a banned substance and whose trainer, Bob Baffert, has since been banned from entering horses at Churchill Downs

1. Last call! No, not a 3:45-in-the-morning-at-a-Louisville-bar last call (though that anachronism may soon be resurrected as the state removes restrictions), but a last call for photographers. We’re looking for photogs — all backgrounds, all ages, all neighborhoods —  who can contribute a distinctive style to an upcoming portrait project, to be published this autumn and led by our collaborators at KERTIS Creative. We need folks who can capture the spirit of their subjects and their environments. This is a paid commission, and the application closes 11:59 p.m. this Sunday. 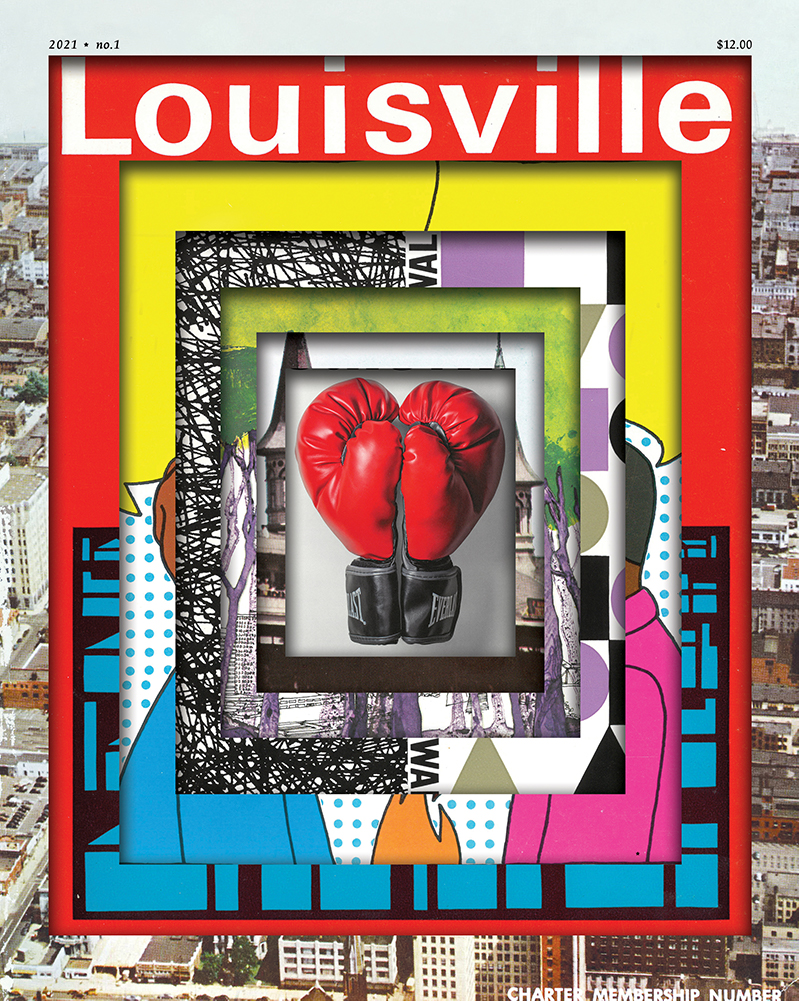 Our new print issue, out now, features Louisvillians commenting on 71 different Louisville Magazine covers, one from every year since our 1950 founding. Considering our past and our future, through the lens of where we are today.

Today is two weeks out from May 28, the one-year anniversary of protesters marching in Louisville’s streets for the first time in the name of Breonna Taylor. May 28 was two and a half months after March 13, the day LMPD officers shot and killed her in her own apartment. Two and a half months. Seventy-six days. Over the summer, the poet Hannah Drake and I were talking about how Taylor — whose name by then was ringing out nightly and reverberating around the world — was initially described as a “suspect,” about how LMPD’s incident report from the night of her death listed her injuries as: “None.” Hannah said, “This was so close to being buried. Breonna was so close to being erased from history.” I think about how many no-justice-no-peace voices were needed to make sure the truth came out — to make sure Taylor would be remembered. What about those who were erased?

For the new issue, I asked Hannah to comment on a cover from 1953: a black-and-white photo that includes, per the caption, “a renovated Jefferson County Courthouse,” now known as Metro Hall. 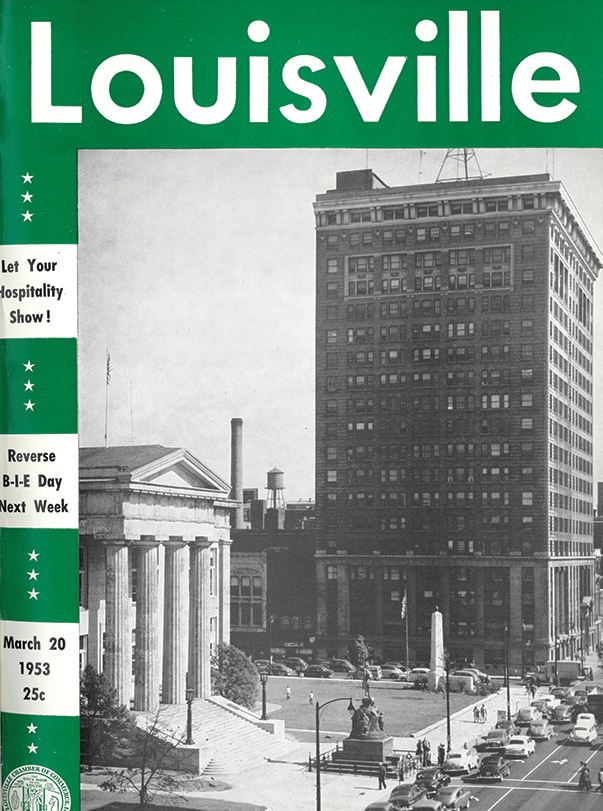 Last June, hundreds of people stood on those very steps, listening to a live broadcast as the Metro Council voted to pass an ordinance banning no-knock warrants, called Breonna’s Law.

Here’s what Hannah said about the old cover:

“When I saw this picture — the cars, people walking downtown — I was immediately reminded of a Life Behind a Veil quote by (the late Louisville native and University of North Carolina) professor Blyden Jackson. He states, ‘Through a veil, I could perceive the forbidden city, the Louisville where white folks lived. It was the Louisville of the downtown hotels, the lower floors of the big movie houses, the high schools I read about in the daily newspapers, the restricted haunts I sometimes passed, like white restaurants and country clubs, the other side of windows in the banks, and of course the inner sanctums of offices where I could go only as a client or a menial custodian. On my side of the veil, everything was Black: the homes, the people, the churches, the schools, the Negro park with the Negro park police…I knew that there were two Louisvilles and…two Americas. I knew also which America was mine.’

“This magazine cover was made in 1953. It was not until 1963 that Louisville passed an open-accommodations ordinance fueled by a Nothing New For Easter campaign. This was a boycott of clothing stores by Black people that intended to apply economic pressure on store owners during the ordinarily busy Easter season. The protests were focused on the Fourth Street shopping district, where Black people were often discriminated against and harassed when attempting to make purchases or eat at certain restaurants.

“I am being asked to write about an image of a time in Louisville that I could have never experienced. That my father, who was born, raised, and died in Louisville, couldn’t participate in.

“In 2020, I stood outside this very same building and was teargassed in my old Kentucky home while protesting the death of Breonna Taylor. This photo is simply a reminder that Louisville will always remind Black people that we live in two Louisvilles and rarely, if ever, are Black people allowed to experience life beyond the veil.” 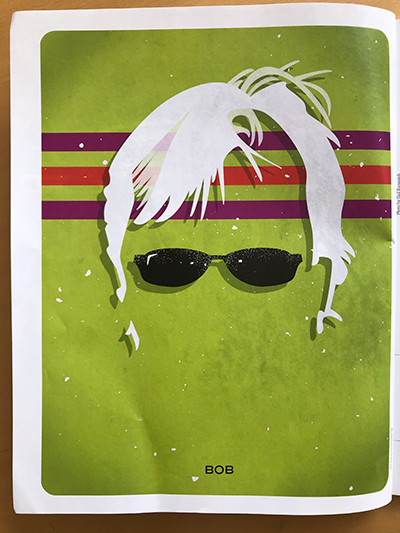 The Louisville artist who goes by Madpixel did this poster of trainer Bob Baffert for our 2014 Derby Issue. The hair, the shades — all that’s needed to recognize horse racing’s most recognizable. As a 12-year-old in Cincinnati in 1997, I remember watching the Derby with my grandparents who were in town, the first time I ever watched the race. Baffert won the roses for the first time that year, with Silver Charm, and I asked, “Who’s the man with the white hair?” I forgot his name but remembered the hair the following year, when he won the Derby again, with Real Quiet. To the casual fan over the last 30 years, what has been a better ambassador to horse racing than Baffert’s white, thinning-with-age mane? Racing isn’t popular enough to be the Sport of Kings anymore. But did it become the Sport of King?

Medina Spirit got Baffert his record-setting seventh Derby win two Saturdays ago, but after the race the horse tested positive for a banned substance. In the New York Times, Joe Drape wrote, “Mr. Baffert has gained the enmity of rivals who believe he has persistently cheated, suspicions fueled by 30 drug tests his horses have failed over four decades, including five in the last year or so.” The Kentucky Horse Racing Commission is awaiting second test results, which will determine if Medina Spirit, the favorite in tomorrow’s Preakness, is disqualified as the Derby winner.

When I look at the illustration today, it seems like Baffert is vanishing.

4. Ronnie O’Bannon, the DJ for Louisville rapper Jack Harlow, has been indicted on charges of murder and tampering with physical evidence related to the shooting and killing of Kasmira Nash at Vibes nightclub Derby Weekend. Nash, a 37-year-old mother of two, was working as a bartender that night.

When I was reporting a profile of Harlow in 2016 and 2017, I remember being in the basement studio in the two-story house where Harlow, 19 at the time, was living in Germantown. O’Bannon, who was 23, came into the room and, at a laptop plugged into monstrous speakers, started playing some of Harlow’s songs as they tried to figure out the order of an upcoming set at Bonnaroo.

The following exchange made me laugh at the time, though now it’s a reminder of how young they were — still are. Harlow was three years away from releasing his huge break, the song “WHATS POPPIN.”

To nobody in particular, O’Bannon said, “I just got a job.”

5. And now words I was sure I’d never write: Call Me Kat, season two. Like you, I’m not sure how that is possible because the FOX sitcom, set (But. Not. Filmed.) at a Louisville cat cafe, has, by my count, only three viewers: me, “Five. Oh! Too…” reader Kristen Miller and her husband.

Kristen emailed me the C-J blurb about Kat getting renewed (sounds like they might be looking for a new showrunner who knows Louisville? josh@louisville.com), writing, “MIRACLES DO HAPPEN.” Then: “Wait — does this mean we have to keep watching? That’s a *visible wince* katastrophe.”

I asked her, “What would be the most Louisville thing the show could do next season?”

She replied, “I’ll have to think about that. But ‘hate-watching a terrible TV show solely to bask in the glow of occasional hometown references’ kinda comes to mind.” 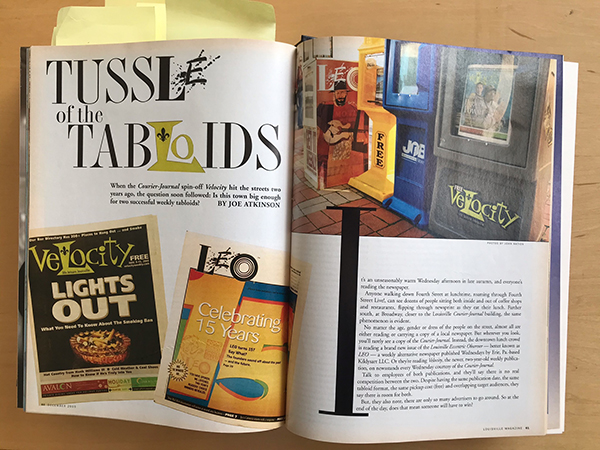 LEO is for sale. Aaron Yarmuth, the alt-weekly’s owner and executive editor (and son of John Yarmuth, who founded LEO in 1990), wrote about his pandemic-pummeled paper in his weekly column, mentioning how, after roughly seven years at the helm, “learning business while meeting weekly print deadlines took a toll emotionally, psychologically and financially.” He told Business First, “I didn’t feel that I am in a position to give LEO the energy and spirit that would help it succeed going forward.”

In 2005, when LEO had just celebrated its 15th anniversary (and wasn’t owned by a Yarmuth), Louisville Magazine did a story about the paper and its newer competitor, the C-J’s own every-Wednesday-for-free pub, Velocity. In the piece, John Yarmuth said, “My goal was to create a forum of divergent ideas.” My pal Cary Stemle, who was LEO’s editor at the time, told the magazine, “Our goal has been, and continues to be, to cover arts, culture, entertainment and social justice. Those are the big four.

“What we add that other papers don’t is this aspect of social justice. When we impact the community, it’s amazing.”

Aaron Yarmuth told Biz First, “I can’t imagine Louisville without LEO. It’s such an important part of the city’s culture.”

A reader whose name I couldn’t decipher left a voicemail about the new print issue, which, minus one piece of art, includes archival cover images from before the pandemic. She said, “I just wanted to call to tell you that I really enjoyed reading the new issue and seeing it because today was the first magazine of any kind that I’ve seen in quite a while that had absolutely no pictures of anybody wearing a face diaper, which are so degrading for human beings.”

I’m vaccinated but am happy to wear my face diaper if it makes you more comfortable. 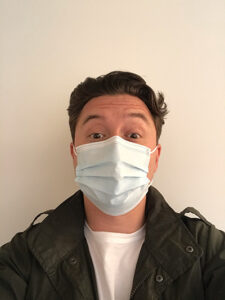