“This one I named Jeffery” — Miles, my four-year-old, on the cicada he had in his pocket yesterday afternoon

1. The New York Times profiled the Louisville spoken-word poet and activist Hannah Drake, whose (Un)Known Project — an IDEAS xLab collaboration with her colleague Josh Miller, the local sculptor William M. Duffy and others — will begin its rollout next Saturday on Juneteenth. The first phase includes two granite-limestone-steel benches between Ninth and 10th streets, facing Indiana across the river. “When people sit here,” Drake told the Times, “I want them to see how close Indiana is and what it must be like to be enslaved and know that freedom is right there.” Before researching the project, Drake “knew Louisville was instrumental in the slave trade. I didn’t know how intricate and deep.”

Eventually, the (Un)Known Project will include a path along the river with four sets of sandblasted footprints — symbolizing two adults and two kids. The Belle of Louisville will host experiential theater. The Frazier and Roots 101 museums will put on exhibits. According to the story, the (Un)Known Project will be “a memorial to those whose stories will never be uncovered, as well as a challenge to the public to unearth narratives that may exist, but are hidden in archives, in attics, in family genealogies, in corporate histories.”

2. The Courier-Journal was a finalist for TWO Pulitzers, for Breaking News Reporting and Public Service Reporting, all related to its Breonna Taylor coverage. I’ll say it again: Please subscribe.

I’ve also been meaning to remind you again to donate to LPM. Last month, Jacob Ryan of the Kentucky Center for Investigative Reporting had a short but informative explainer titled “What Is Department of Justice Looking at in LMPD Investigation? Basically Everything.” He wrote, “Federal investigators are collecting a catalogue of internal documents and records that would detail virtually every recorded interaction between Louisville Metro Police officers and citizens as they set the stage for a deep examination of the beleaguered agency.” The DOJ’s goal is “to assess whether [LMPD] has a pattern or practice of civil rights violations in policing,” all of this coming “in the wake of a flurry of scandals and controversies…including the police killing of Breonna Taylor and the months of protests that followed.”

3. I try not to mention sports too much in this newsletter, but: In January, during a post-game interview, Shaq talked shit to former U of L star Donovan Mitchell, saying, “You don’t have what it takes to get to the next level.” I watched the pisses-me-off clip again last night, and I’ve come to interpret Mitchell’s silence, the slight smirk, the is-that-fury? in his eyes, as a Lexington-and-Concord moment in real time, a turning point in his young NBA career. Last night Mitchell dumped 37 points on the Clippers, two nights after pouring in 45, and now his Jazz are up 2-0 in the series and are two wins away from making the Western Conference Finals.

Mitchell’s initial response to Shaq should be on T-shirts all over Utah: “Aight. That’s it.”

4. And now some Burgoo, aka a serving of the roadkill stew that is my monthly inbox.

“Good day!” // WHAS’ Crusade for Children reached a cumulative total of $200 million raised since 1954. // Esquire, the reason I got into magazine-making, included Trouble Bar in Shelby Park on its 2021 list of Best Bars in America. // Check out Yelp’s #LouAdventureChallenge throughout the summer, sponsored by the Louisville Visitor Center. // The Preston Arts Center across the river in Jeffersonville is launching a “curated boutique” with art supplies, gifts, fine art, “fun art” and more, with a grand opening July 10. // And July 10 happens to be my 12-year wedding anniversary. This newsletter mention is your gift, Bri! Hope you like it! // Louisville Burger Week, July 19-25. // Normal hours at eight library locations beginning July 11! // “Boy, do I have a story for you!” // Deborah Whistler’s “meticulous paper cuttings and beautifully intricate pen-and-ink drawings” at Moremen Gallery, beginning June 18. // “Just circling back.” // The new art installation at Bernheim, Spirit Nest, is “part human-sized bird nest, part tree house” and looks like something out of Game of Thrones. // Last weekend at Bernheim my kids played on phase one of the new 10-acre natural playground. Miles: “Dada, is a tree a jungle gym?” Can be. // On July 17, Misters for MS is “a tall, dark and handsome fundraiser” for the local chapter of the MS Society. // A new book with ties to Yum! execs: R.E.D. Marketing: The Three Ingredients of Leading Brands. // Hmm, and all this time I thought the key was a blend of eleven secret herbs and spices. // CO11AB, a new co-working space downtown. No, the 11 isn’t for 11 herbs and spices. It’s on the 11th floor in the Center Tower of the Waterfront Plaza Building. // “Hello?!?!” // The team from Meyzeek Middle is in the finals of the American Rocketry Challenge this Sunday in Dayton. // Beginning June 18, River City Drumbeat, a doc about west Louisville’s River City Drum Corp, will be available on PBS. // Live music!!! Ben Sollee this Sunday at Headliners, Sylvan Esso at Paristown Hall Nov. 2, San Holo at Paristown Nov. 7. // The James Graham Brown Foundation announced grant awards to several local groups, including Metro Housing Authority, Teach Kentucky Inc. and the Association for Community Economics and its grocery. // The Cabbage Patch has a new pollinator garden. // “Are you there?” // “Very best regards.” // See ya in Shelby Park at one of the best bars in America.

5. It’s summer break for Bri and the kids, so we’re trying to chip away at the toy mountain after moving into a new house. The other day, Bri asked Miles to make a pile of everything he doesn’t want. Here’s what he came up with: 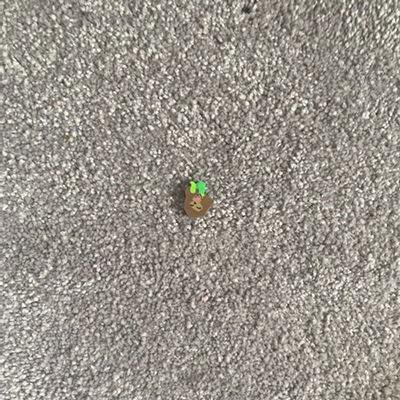 Two summers ago we published photos of adults who were learning to swim, with underwater photography by Clay Cook and interviews by Amy Talbott.

My friend Betty Bayé, the former Courier-Journal editorial writer and columnist who has contributed to the magazine, happened to be in the class at the Central High School pool, and she told Amy: “People ought to live some of their dreams, and this was a dream of mine. If I never become — and I’m going to date myself — Esther Williams, that’s OK. This is the equivalent for me of people climbing Mount Everest or jumping out of a plane.” 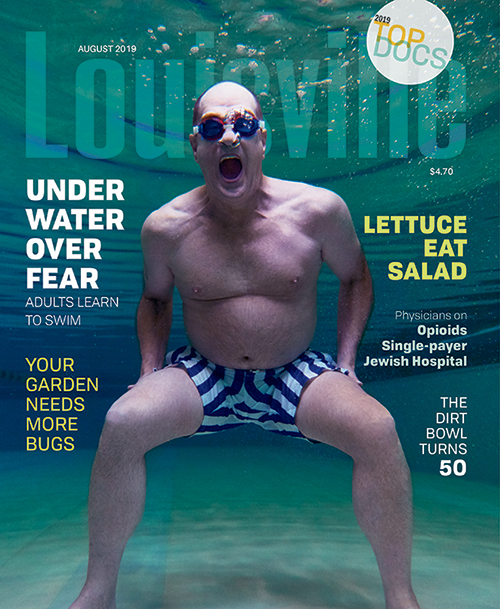 “I was never afraid of the water. I would jump in. I just needed to understand the basics, like breathing and technique. I’m working on that and trying to have even, relaxed strokes. I think I tend to rush it, and that wears you out.” — Tracy Bonn 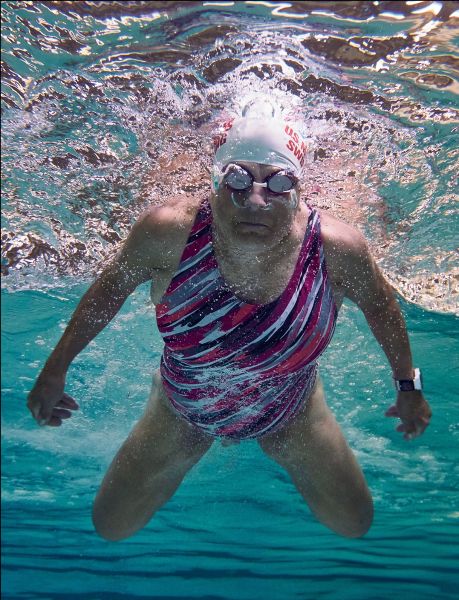 “I was swimming on my back, and all the sudden I realized I wasn’t paying attention to what I was doing. I wasn’t thinking mechanics. It had kind of become a part of me. I was swimming.” — Marie Ruf 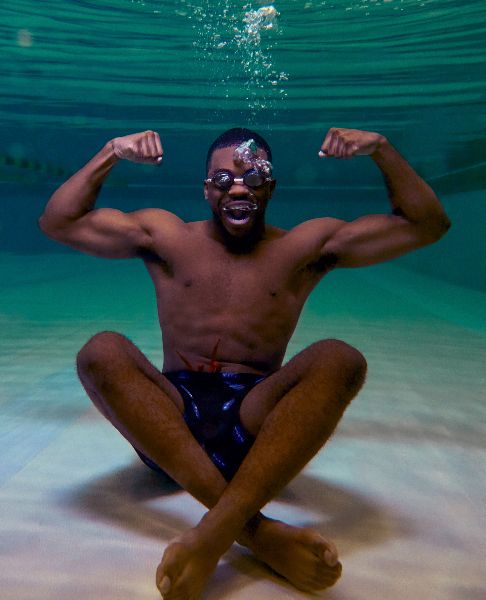 In June 2019, Quintez Brown wrote an opinion piece for the Courier-Journal titled “Black people can’t swim in Louisville, and it’s putting kids at risk,” in response to the closure of public pools that summer due to city budget cuts. William Kolb, in charge of the local chapter of U.S. Masters Swimming, read Brown’s column and invited him to take swimming lessons.

We’re a little more than a week out from the summer solstice, the year’s longest day. Sunset is at approximately 9:07, and I swear on recent nights I’ve been seeing remnants of sunlight until like 10. Shall we head into the weekend with a slow clap for Louisville’s blurring of day and evening come summertime?