“Dada, the mask isn’t so bad” — Miles, my four-year-old, who must wear a mask all day at preschool per Gov. Andy Beshear’s new mandate. Again, he’s four. Again, isn’t so bad.

1. My former colleague Dylon Jones edited the new edition of TAUNT titled “Unaccounted,” a collaboration with Southerly and Queer Kentucky. Dylon’s beautiful first drafts used to bring tears to my eyes, and I got that same choked-up feeling reading his editor’s letter:

“If anyone has ever made you question your identity as a Kentuckian — if you’ve ever felt like, when people said, ‘Kentucky,’ they didn’t mean you — I hope you’ll see something of yourself reflected here. This issue is for you.”

2. WDRB has a piece about how Wayside Christian Mission has been in Operation White Flag mode (meaning nobody is turned away, even if no beds are available) due to the hellish heat, with Wayside COO Nina Moseley saying, “It’s just as dangerous…as the extreme cold weather is, especially since so many of our population have lung disease, heart disease and other conditions that are exacerbated by the heat.”

3. For the next issue of Louisville Magazine, more than 100 people from our local food-and-drink service industry answered questions about where we’ve been the past year-plus, and where we go from here. We’re THIS close to sending the issue to the printer, with photography and illustrations and design I’m so excited for you to see.

Here’s the last question I always ask folks during an interview, and how three of the service-industry workers answered:

Anything else you want to add that I didn’t ask about?

“I love this world of food I’m part of and couldn’t imagine myself on any other path in life. I have been in the industry for 32 years. I had some non-restaurant jobs and just couldn’t do it.” — Lee Krauss, Jack Fry’s

“We don’t want pity or a handout. I just appreciate the acknowledgment from the media that the playing fields have not always been equal for Black people. We knew we were not crazy.” — Tumeka and Aaron Barbour, Dasha Barbour’s Southern Bistro

“If I had my way, I think everyone should have to work shifts in a restaurant. If the pandemic has taught us anything, it is that we should try to handle one another with grace.” — Anna Gray, Red Hog

“We basically stopped recycling” — somebody at the Baxter Jack’s sand volleyball courts, talking about the city’s new every-other-week recycling schedule.

5. “Our Future Is Dying Off,” a C-J story by Jonathan Bullington, Billy Kobin and Sylvia Goodman, details how gun violence is killing kids, including 16 so far in Louisville in 2021 (not to mention a 17th homicide victim who didn’t die by gunfire). “More children were killed from Jan. 1 through Aug. 11 than in all of 2020, when 16 children and teens younger than 18 were among the city’s record-high 173 homicide victims,” they write.

“That we have become normalized to children being slaughtered is complete crap,” LMPD chief Erika Shields said. “We have got to be better than that.”

I hope you’ll read the tributes to the victims even though they’re hard to get through with dry eyes, especially when paired with family photos. I’m not sure I can forget this chilling detail: They write about how, after one shooting on I-264 near Bells Lane, “La’Rea tried to get out and run from the car after it was hit with the initial round of bullets before four assailants gunned her down and then drove away.” La’Rea was nine years old. Her dad also died at the scene. Ka’Narri, her sister who is now nine, survived. 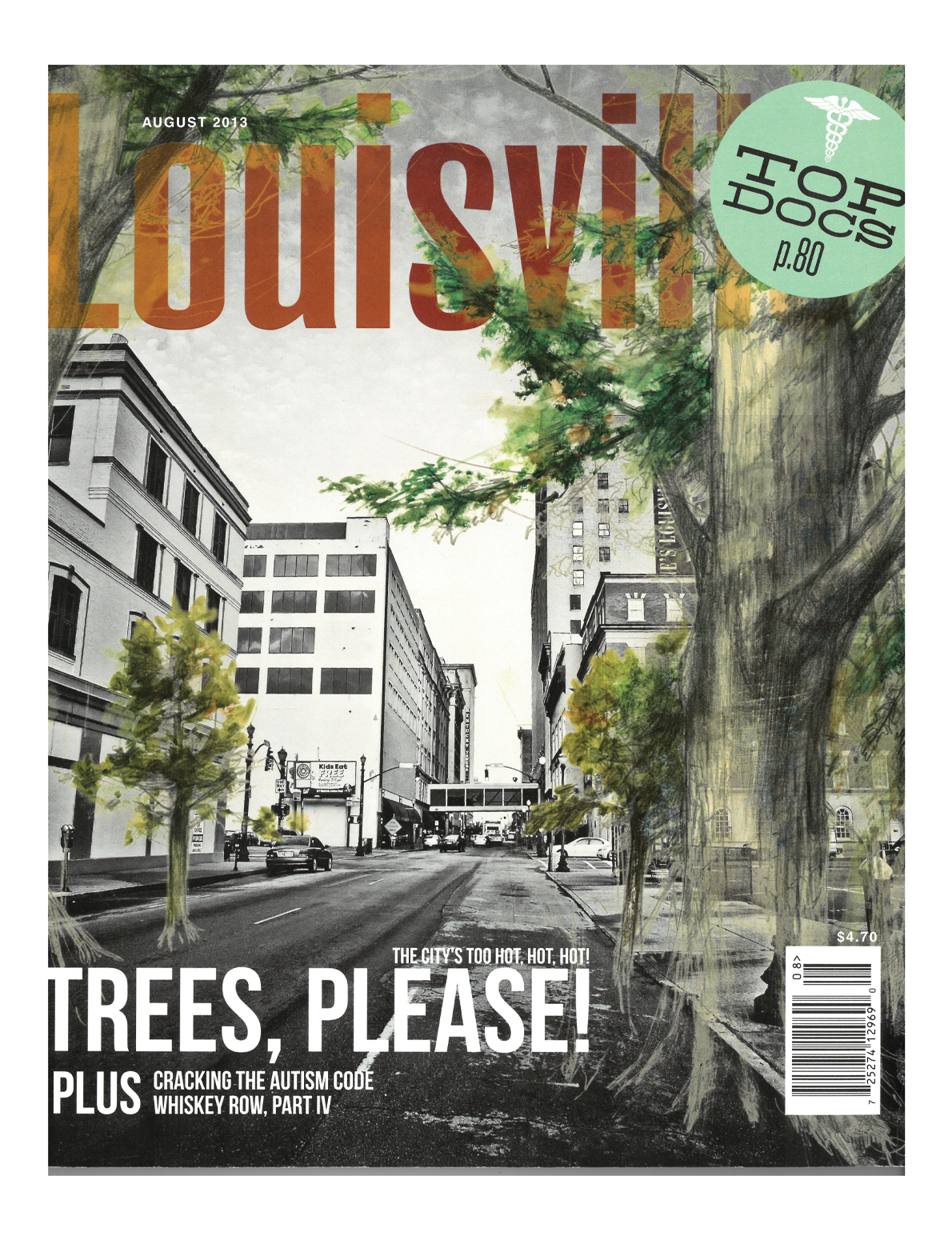 For an archival project published in the spring, Dr. Aruni Bhatnagar, director of the Christina Lee Brown Envirome Institute at U of L, commented on this “Trees, Please!” cover, with photograph by Mickie Winters, illustration by Douglas Miller and story about Louisville’s “heat island” by former managing editor Mary Chellis Nelson, who was an intern when she wrote it, her first of many cover stories.

Dr. Bhatnagar said, “This cover could still be featured today. If we showed you a map of tree canopy in Louisville, you would not only see where trees are in the city, but also you would see patterns of disease burden, income and urban heat. Living in greener areas has been linked to lower instances of heart disease, anxiety and depression. Low-income areas of Louisville have about half as many trees as the city’s average, and lack of tree cover can make a neighborhood more susceptible to urban heat-island effects. Trees also make air healthier to breathe by removing pollutants. According to Louisville Metro’s 2015 tree assessment, the city loses an average of 54,000 trees each year. Louisville is still getting hotter and still losing thousands of trees annually. We urgently need more trees to make Louisville a healthier and happier place to live.”

On this Friday the 13th: “FIVE. OH! TOO…” celebrity Mayim Bialik — aka Kat from Call Me Kat, the Louisville-set FOX sitcom that takes place at a Highlands cat cafe (PROMISE I’LL NEVER MENTION THE SHOW AGAIN!) — is one of the new hosts of Jeopardy! (confession: I think she’ll be great), and also, welp, the world is ending.

Newsletter slow clap for her, I guess?