“The past year has taught me what I already knew: People who work in the service industry work their asses off.” — Natasha Sud, ShopBar

1. For our new issue, which should hit mailboxes next week, photographer Sophia Mobley took oh-my-God-now-I’m-so-hungry! food shots to accompany some of the words from workers in Louisville’s service industry, including how they answered the question: Besides something from where you work, what Louisville dish have you eaten more than any other throughout the pandemic? 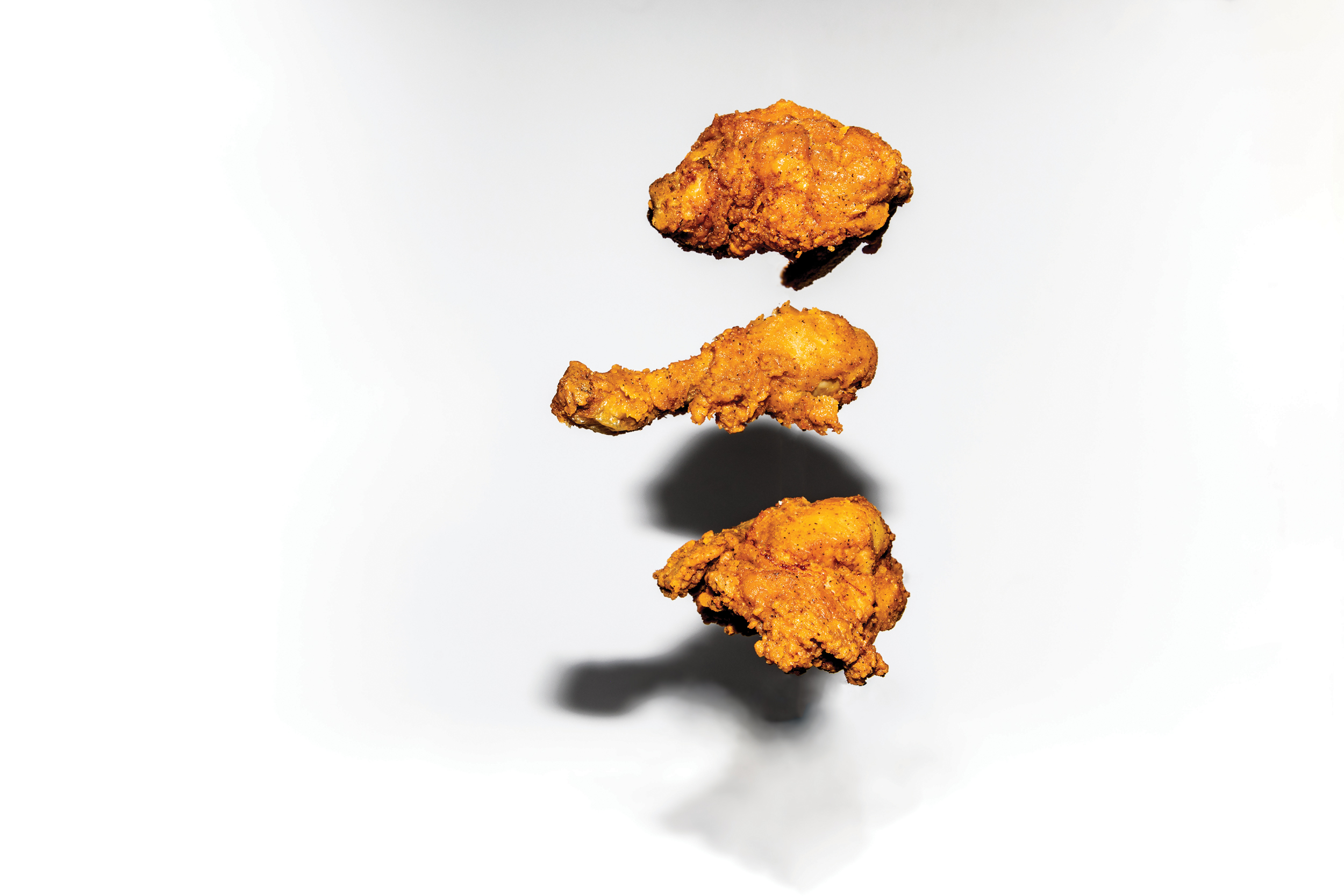 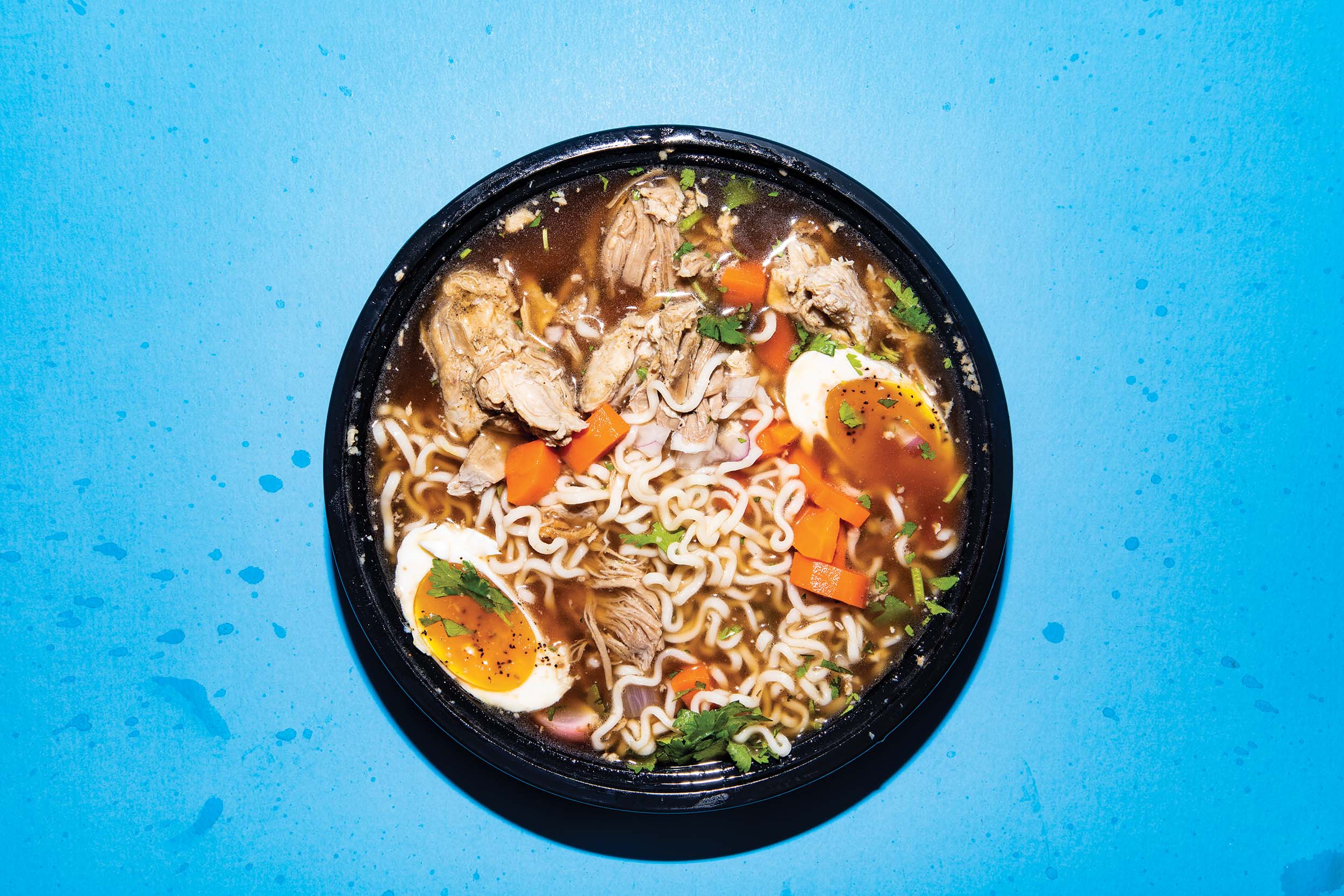 “Ramen from the Happy Belly Bistro food truck. Follow her. Find her. She’s a brilliant chef and an incredible woman. Her food is flavorful and filled with her spirit.” — Anne Shadle, Mayan Cafe 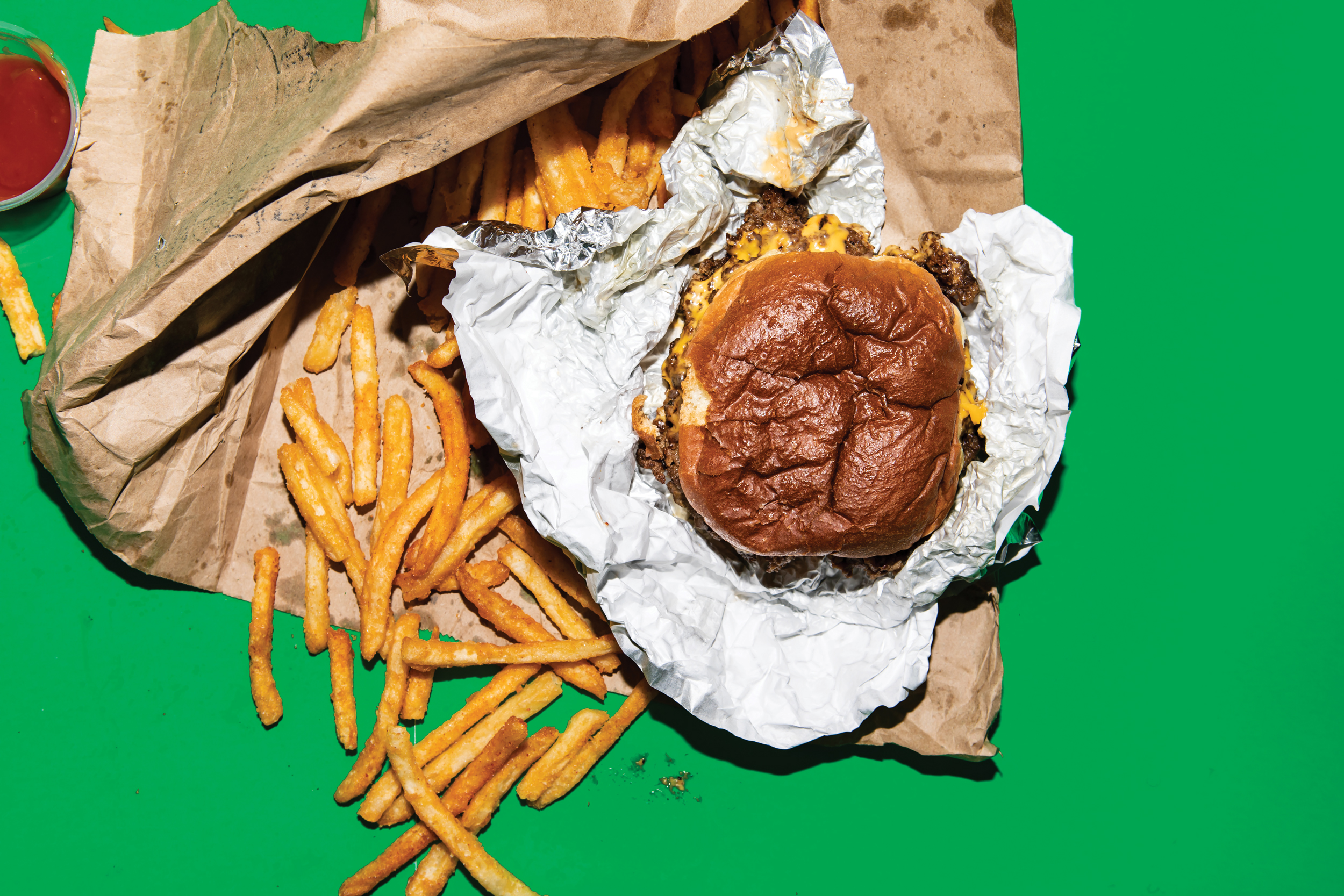 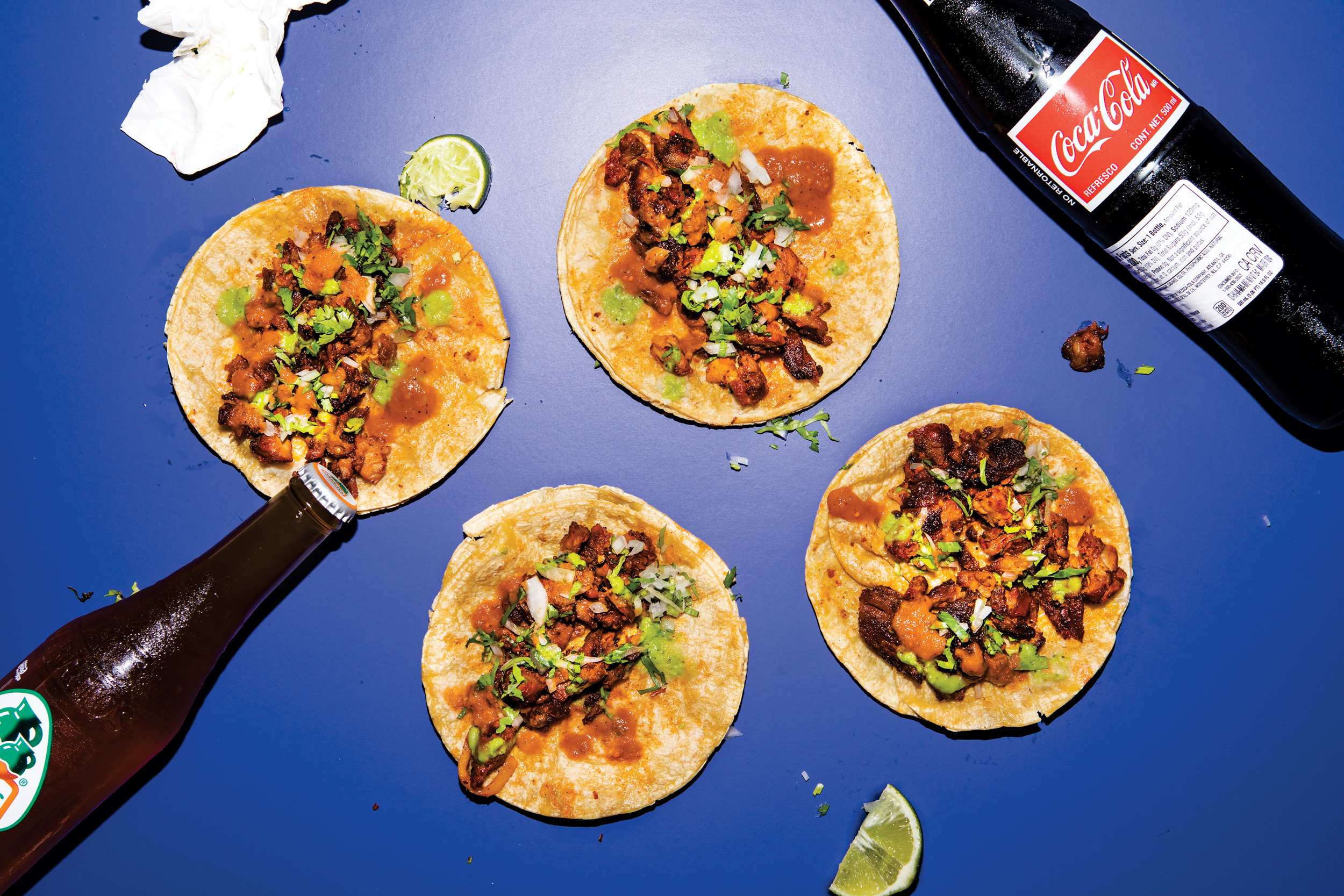 “The tacos al pastor from La Rosita on Westport Road are the best pastor I’ve had anywhere!” — Anthony Lamas, Seviche 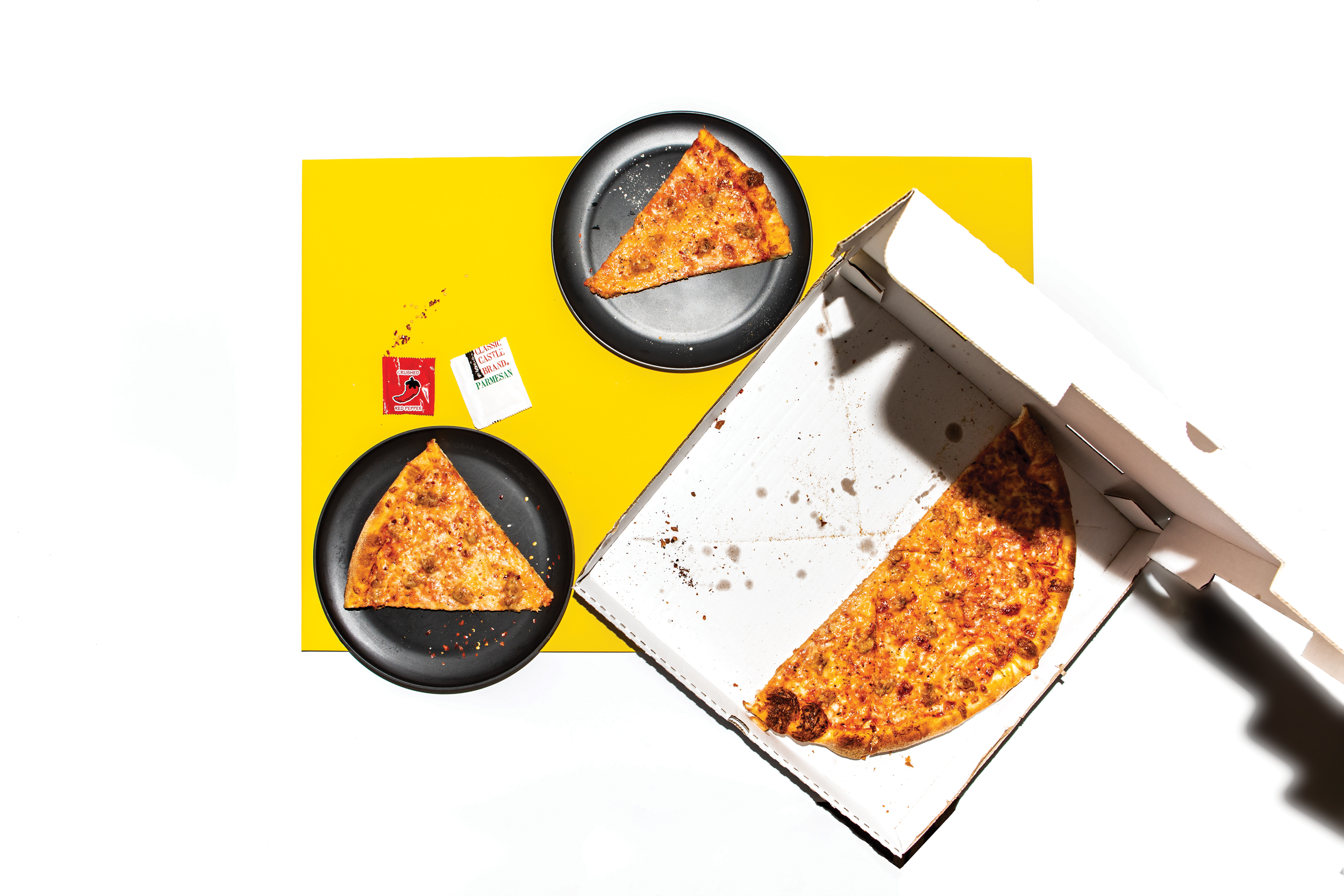 “We ordered sausage pizza and breadsticks with beer cheese from The Post more than I care to admit.” — Calvin Philley, High Horse 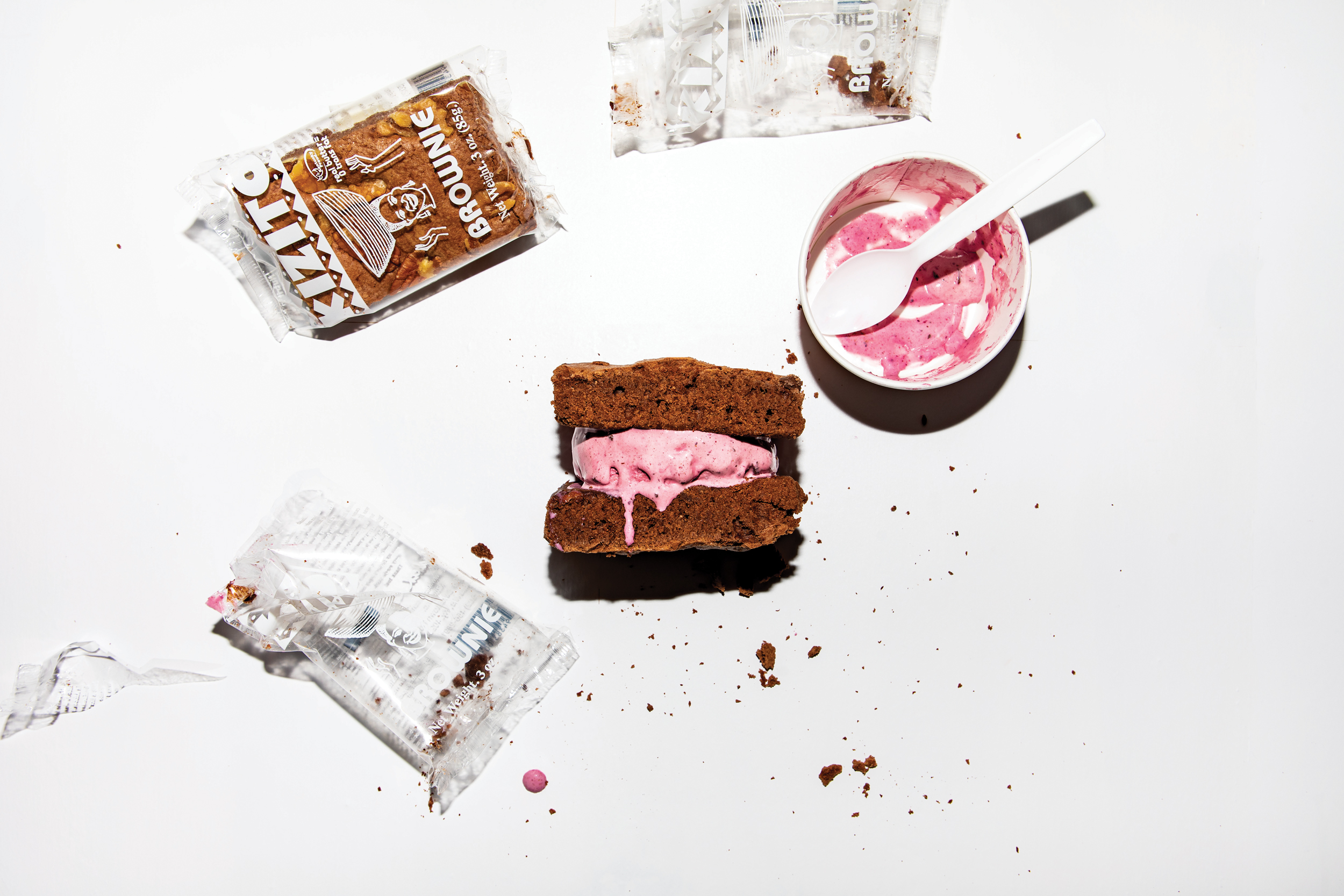 2. I asked Sophia, the photog, about her artistic process.

What drew you to these dishes?
“They reflect the culture in Louisville: eclectic, diverse and modern, with a bit of traditional Southern charm.

“My artistic approach was to highlight the unrefined experience of ordering to-go. Food is often photographed with a beautiful soft light and very careful styling, which definitely has its place, but I really wanted to show that food can get messy and still be beautiful. Crispy and golden fried chicken, perfectly grilled pork in the tacos al pastor, the contrasting colors of the raspberry ice cream and the chocolate chip brownie — they really pop off the page with the use of direct, hard light.”

And what about the cover?
“I used the same lighting technique for the cover. Designer Sarah Flood-Baumann had the idea of using blankets of roses, a nod to Derby, and to-go boxes as a way of saying thank you to our local restaurants in a very Louisville kind of way.” 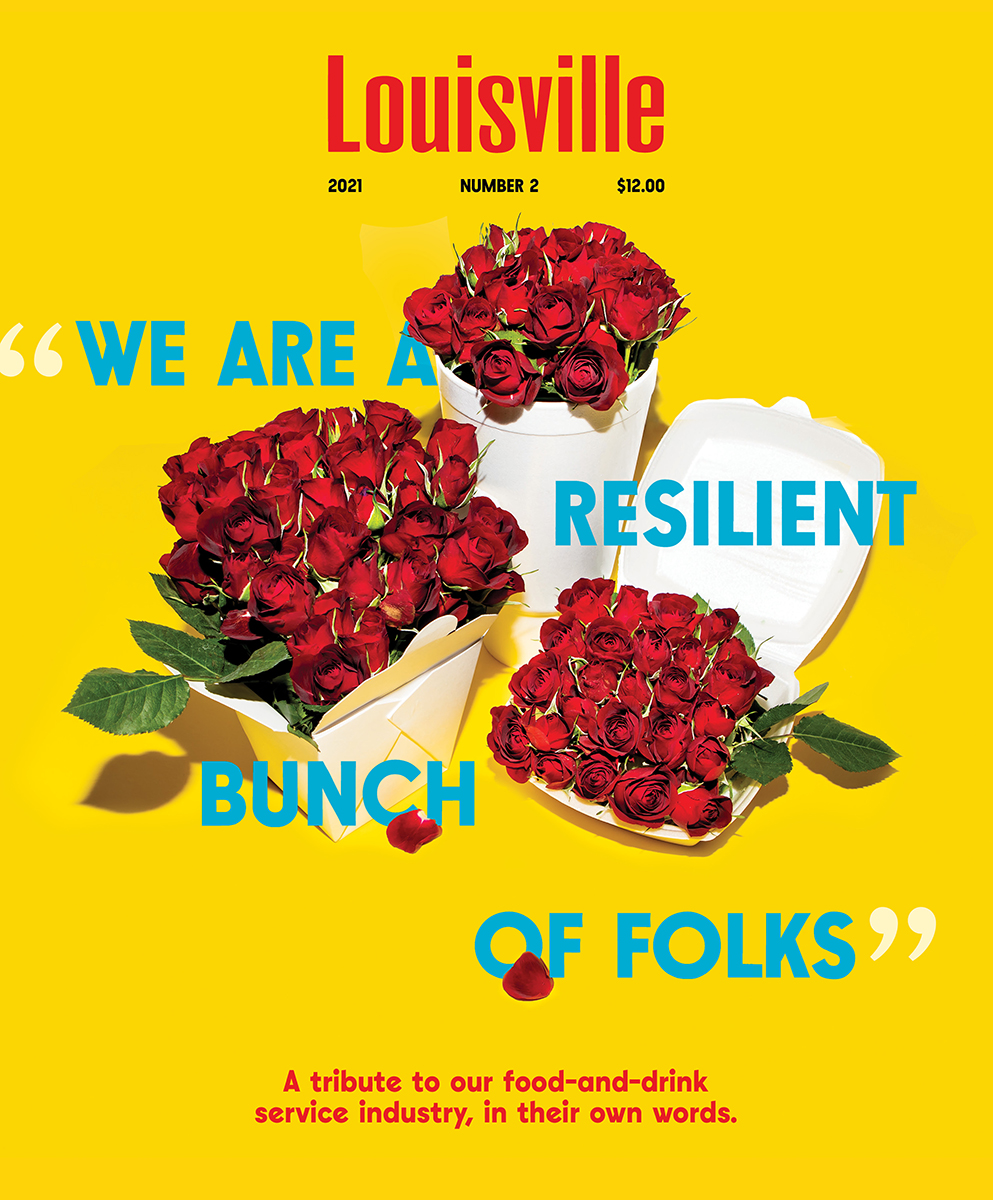 3. In December 2001, three months after 9/11, the magazine published a piece by Louisville Magazine contributor Katy Yocom titled “A New York State of Mind,” about how, that October, for a trip that had been planned long before the towers fell, she and her husband flew to New York to see The Producers on Broadway (the tickets coming through on Sept. 10) and contribute to the city’s recovery effort. The “air was acrid with smoke from underground fires still burning.” She wrote: “It’s impossible to tell how far the devastation stretches. We walked along Broadway, amid makeshift memorials to the victims, and peered down the side streets, catching keyhole glimpses from two blocks away. Down one street, a huge American flag billowed from a crane resting atop the rubble. A block farther, the skeleton of Building Five stood gutted and charred. At the next corner, a flight of girders peeled away from a building in artful strips, splaying downward as delicately as a bird of paradise.

“And then we came to Maiden Lane and a full-on view of what little remains of Tower Two, the sad stretch of wall still erect but badly mangled. My mind could not connect that forlorn ruin with the soaring tower where I’d stood, less than a year ago, looking over the city from 107 stories up. I lifted my gaze from the wreckage and let my eyes travel upward, past the top of the tallest building left standing and far into the vacant sky. Only in that empty blue could I begin to get a sense of what was lost.

Inside a restaurant, “the manager was hugging a tall, gray-haired man. ‘I’m so glad you’re here,’ he told him. Later, we learned that the gray-haired man was the general manager of Windows on the World, the restaurant atop Tower One. His life was spared because he was a few minutes late to work that morning.”

4. And now a little newsletter love for another local newsletter: You should subscribe to LOUtoday, co-written by longtime Louisville Magazine contributor Katie Molck. Monday’s edition included an interview with the Louisville Free Public Library’s yellow, fuzzy, Sesame Street-y, nope-this-is-not-a-joke mascot, Gorp, whose favorite place to read a book is in a tree, “preferably one with pinecones to snack on.” Oh, and not sure how I missed this, but: Erykah Badu at Waterfront Park tonight!

5. This week, My Buddy Eric Who Has A Vintage Cardinal Mascot Tattooed On His Ass™ said, “The loss to Ole Miss was embarrassing. And all the stuff with the basketball team and Chris Mack and his suspension. I’m done, man.”

“You gonna tailgate this Saturday for the EKU game?” I asked.

WFPL’s Stephanie Wolf wrote an obituary for the Rev. Al Shands, who died this week at age 92. He was the founder of the arts-supporting Great Meadows Foundation and a “writer, film producer…art collector and philanthropist.” (In a tribute to Shands, next week KET will re-air three of his films examining life in 1970s Louisville: Kentucky Time Capsule #109 and #110 on Sept. 13, and Louisville: 30 Years of Change on Sept. 15.)

For the May 2014 issue of Louisville Magazine, my second as editor, Jon Lee Cope wrote about Shands, with accompanying photos by Ted Tarquinio. 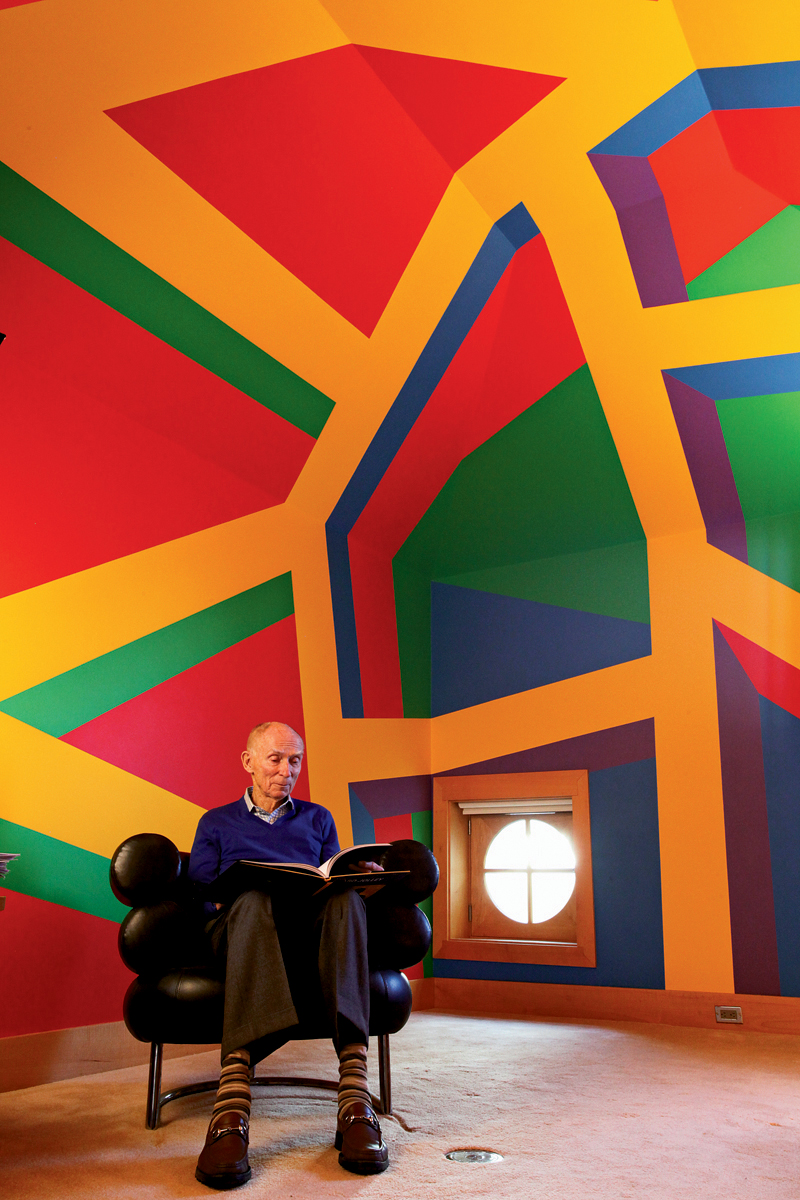 Shands inside his home, Great Meadows, in a room Sol LeWitt painted with Wall drawing #1082.

Jon Lee wrote that Shands “realizes that the party cannot last forever, and that all wonderful evenings come to an end. ‘Nothing in life, not even art, is permanent,’ Shands said.” Shands talked of bequeathing his art collection to the Speed “and to the people of Louisville.” He said, “I know that museums can be dusty and staid, but I know that this work will invite you in and entertain you. You will be able to gaze at the works for hours on end; I know, because I have done it.”

Jon Lee said, “Shands becomes delighted when he speaks of this legacy, and, like a host sharing a secret, he whispers, ‘When I am gone, the collection will change, and I love the fact that it will all dissolve and dissipate and go into new places, and that gives me hope. Change is what keeps us alive and moving forward.’” 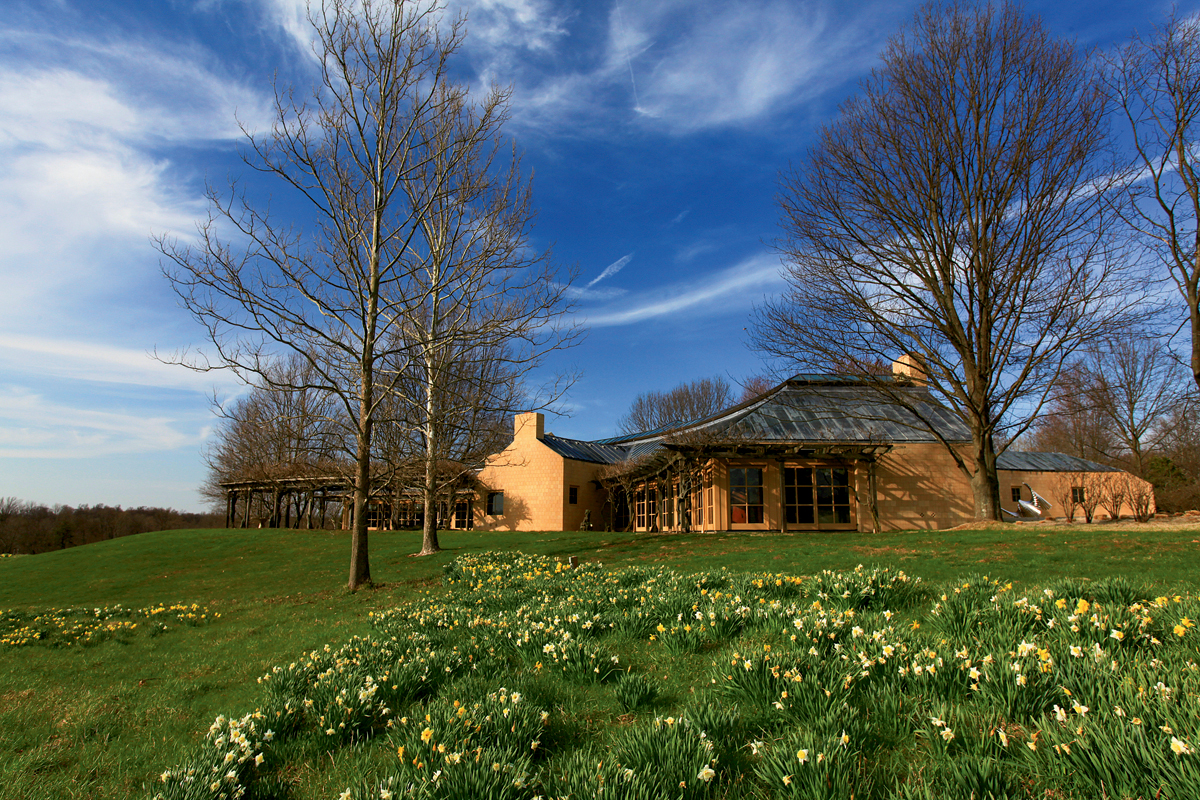 Built in the 1980s, Great Meadows is, Jon Lee wrote, “a house created for an art collection” that “stands on 10 acres of rolling Oldham County countryside.” Shands and his wife, Mary Norton Shands (who died in 2009), picked the site “because of its propensity for fireflies.” 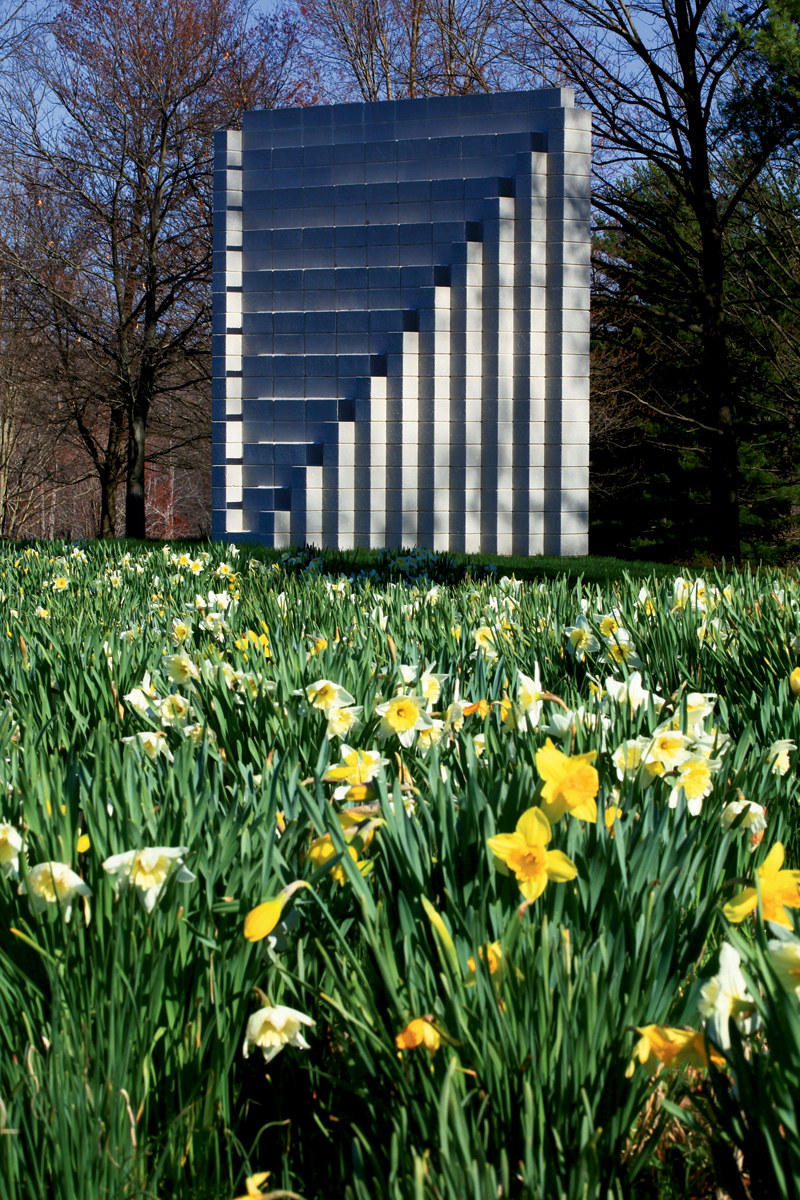 Sol LeWitt, Progression (1997; installed 2011). Shands, in the book Great Meadows: The Making of Here: “I’ve often thought about having a plaque made that would read something like, ‘Mary and Al Shands discovered in this house that art, architecture, landscape and hospitality are all part of the same experience.’” 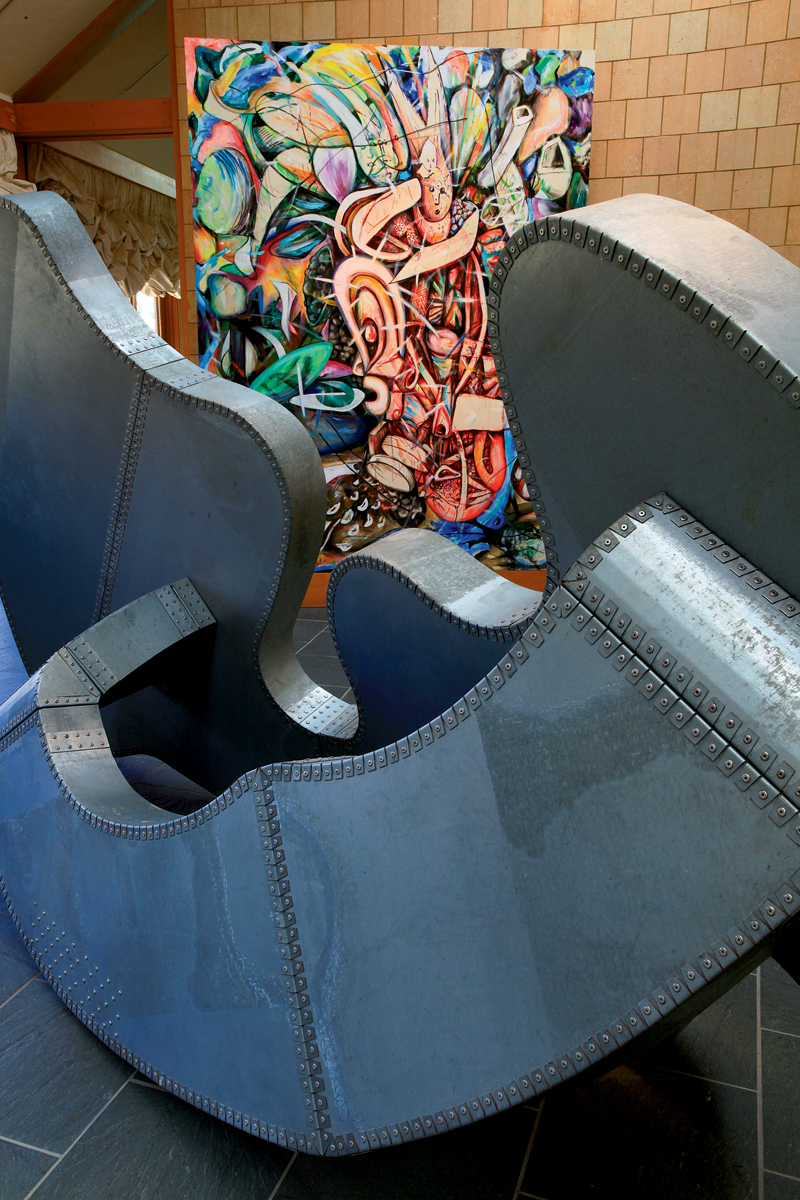 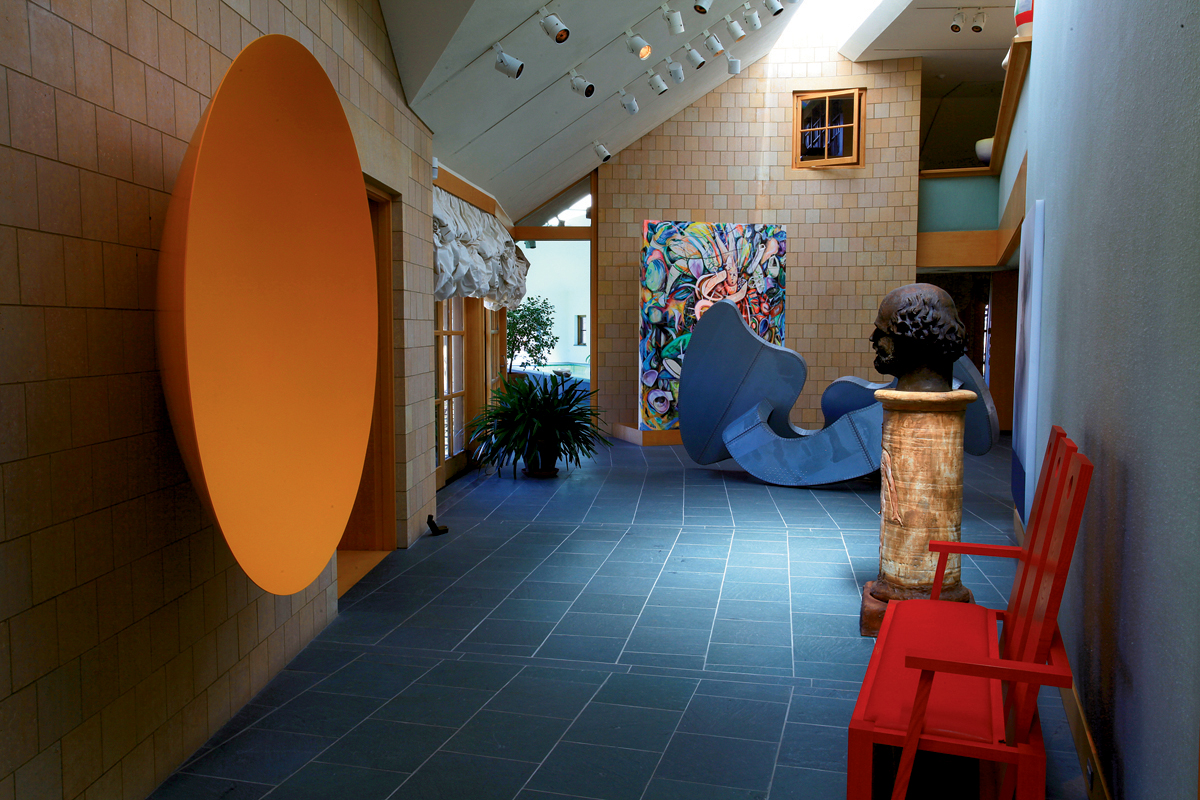 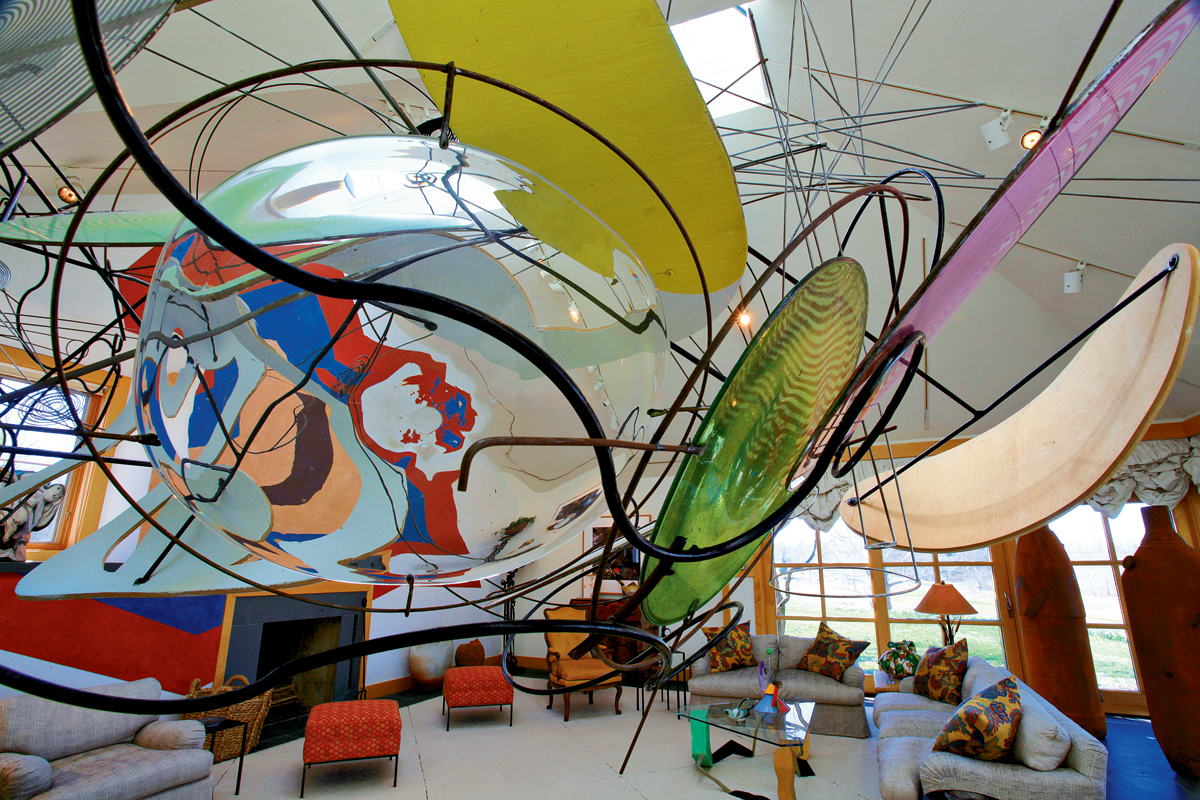 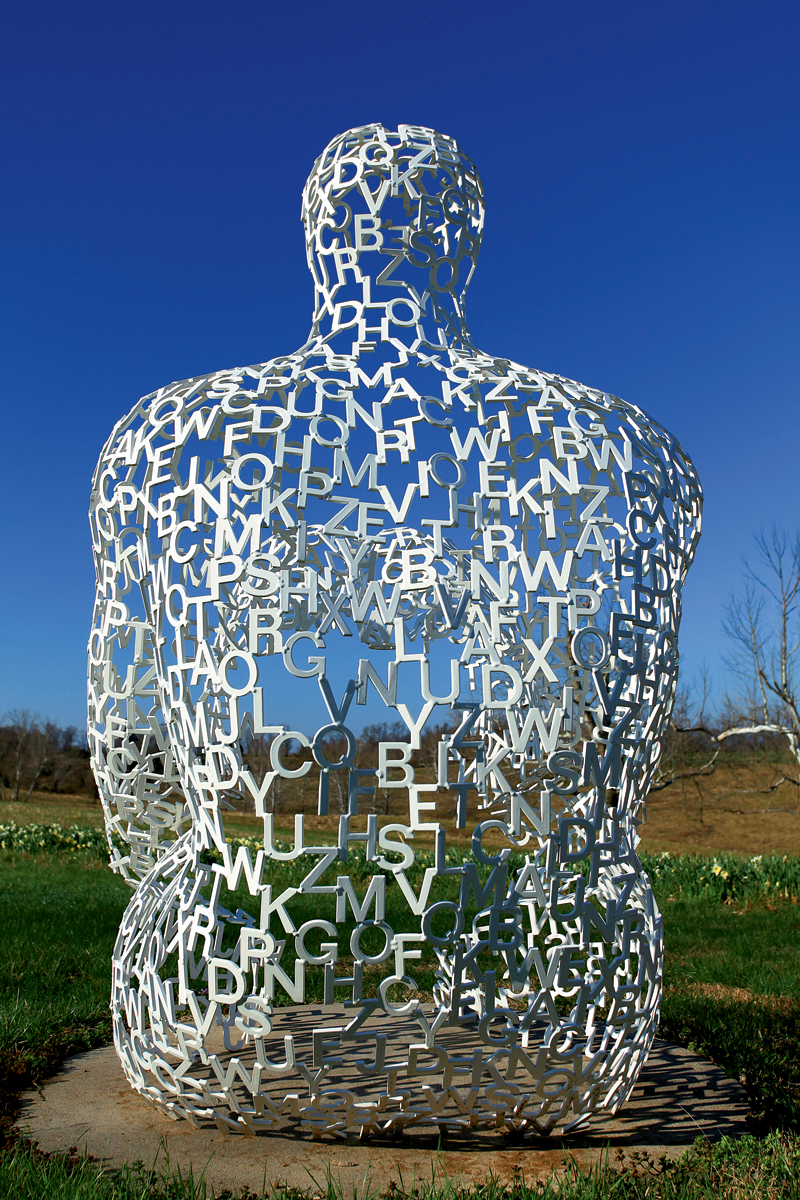 Jaume Plensa, Not Yet Titled (2008-’09). Shands: “The sculpture was made especially for the house, and if you gaze at it carefully for long periods of time, words will begin to spell themselves out to you. Once, I found the word ‘Blake,’ and, oh, how I loved the pure poetic aspects of that word!”

“Dada, this place is beautiful,”  said Miles, my four-year-old, describing the Germantown Baseball diamonds down a hill behind St. X. I didn’t know the fields existed until Miles — now remember, he’s four — and his team, the neon-orange-jersey’d Lizards, started playing fall ball there THREE. DAYS. A. WEEK. He’s not even in kindergarten! “Dada,”  he said, “can I come here EVERY day?”